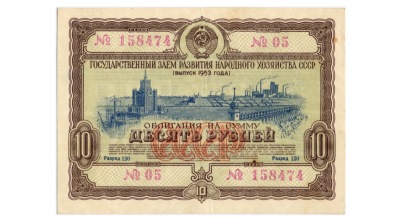 The US sanctions imposed on April 15 that bar US investors from buying Russian Ministry of Finance ruble-denominated OFZ treasury bills in primary auctions come into force on June 14.
By bne IntelliNews June 14, 2021

The sanctions are the first to target Russian domestic debt, but are seen as largely symbolic, as the ban does not include the “nuclear option” of banning US investors from buying the Ministry of Finance’s workhorse bonds on the secondary market or owning the popular bonds.

Observers point out that by nevertheless targeting the OFZs the White House has taken the sanctions regime up to a new level and has created a legal mechanism whereby extending the sanctions to include an outright ban is easy, so the sanctions are indeed significant.

The Kremlin condemned the sanctions when they appeared, but appears to have accepted them. Russian Foreign Minister Sergei Lavrov took a new hard line on new sanctions in his new rules of the game speech in February where he said that Russia would not tolerate any new sanctions, but left himself some wiggle room by saying Russia would react harshly to any “economically damaging” sanctions.

At the time it was not clear if the Kremlin would accept US President Joe Biden’s offer of a one-on-one summit with Russian President Vladimir Putin and the fear was the April 15 sanctions would derail the chances of the talks that both sides seem to want. However, that meeting is due to happen this week on June 16 in Geneva, although both sides have been playing down expectations.

Biden has just left the UK, which hosted a G7 summit where he tried to forge a common position of the world's rich nations on Russia so he could present a united front to Putin.

The G7 referred to Russia specifically in its joint statement following the summit and laid out its wish list of demands:

“We reiterate our interest in stable and predictable relations with Russia, and will continue to engage where there are areas of mutual interest. We reaffirm our call on Russia to stop its destabilising behaviour and malign activities, including its interference in other countries’ democratic systems, and to fulfil its international human rights obligations and commitments. In particular, we call on Russia to urgently investigate and credibly explain the use of a chemical weapon on its soil, to end its systematic crackdown on independent civil society and media, and to identify, disrupt and hold to account those within its borders who conduct ransomware attacks, abuse virtual currency to launder ransoms, and other cybercrimes.”

“We reiterate our support for the independence, sovereignty and territorial integrity of Ukraine within its internationally recognised borders. We call on Russia to alleviate tensions and act in accordance with its international obligations, and to withdraw the Russian military troops and materiel at the eastern border of Ukraine and on the Crimean peninsula. We remain firmly of the view that Russia is a party to the conflict in Eastern Ukraine, not a mediator. We affirm our support for the Normandy Process to secure the implementation of the Minsk agreements, and call on Russia and the armed formations it backs to engage constructively and recommit to the ceasefire. We reaffirm our efforts to strengthen Ukraine’s democracy and institutions, encouraging further progress on reform,” the G7 statement said.

Ahead of the meeting Putin gave an interview to Russian state TV where he laid out some of his expectations, focusing specifically on arms control talks that both sides have brought up several times and which is one of the topics where there is more common ground and so the hope for programmatic talks.

Putin said the military superpowers needed “to create actual working mechanisms for co-operation on subjects that are of mutual interest to us.” These included “strategic stability, regional conflicts, [and] global concerns about the environment.”

Under then-US president Donald Trump the EU and the US became estranged, which played to Russia’s advantage. The Kremlin focused more on bilateral relations with countries like Germany rather than dealing with Brussels as a whole. The issue of Germany’s support of the Nord Stream 2 gas pipeline help further fracture Europe’s position on Russia.

Biden will be in Brussels for the next two days before going on to meet Putin in Switzerland to continue the repair work. The goal of the meeting is to freeze tensions and form a “stable” relation with Russia, as both Biden and Putin have made it clear their priority is to focus on serious domestic political issues rather than engage in sword play on the international stage. The US has been deeply riven by the Trump years and social discontent is running high. Putin faces very similar problems at home after spending on a military modernisation programme that was launched in 2011 has meant that the real incomes of average Russians have been falling almost continuously for eight years. Moreover, Russia has key parliamentary elections this September and the Kremlin wants to ensure the ruling, but highly unpopular, United Russia Party is re-elected with a majority.

The OFZ are the Ministry of Finance’s main tool for funding the budget. However, as the US sanctions come into force the ministry has already almost completed its borrowing programme for this year and doesn't need to issue any more bonds if it doesn't want to.

However, more bonds will be issued, as the ministry says it wants to retire some of the most expensive debt issued last year to fund the additional coronacrisis spending, where it had to increase yields to attract investors. Foreign investors started selling down the OFZ last year as the crisis unfolded and that accelerated as geopolitical tensions built in the delicate diplomatic dance that Washington and Moscow have been engaged in during the first part of this year. Tensions flared when Russia built up its forces along the Ukrainian boarder and the Ministry of Finance had to cancel one of its auctions due to volatility on the market. In subsequent auctions Russian state-owned banks stepped into the breach and bought some 80% of the bonds issued, but more recently foreign investors have started to return to the market as the atmosphere lightens. Nevertheless, the share of foreign investors in the outstanding OFZs has fallen from a peak of 34.9% in March 2020 to 19.5% in April this year, the last data available.

US President Joe Biden signed an executive order to impose sanctions on Russia on April 15 that prohibits its companies from directly acquiring Russian debt liabilities issued by the Central Bank, the National Wealth Fund and the Finance Ministry after June 14, 2021.

In addition, the administration noted, American financial institutions are prohibited from lending ruble or non-ruble funds to these three organisations. The restrictions extended the existing bans on Russian sovereign debt transactions, which have been in effect since August 2019, that prevented US investors from participating in the primary issues of Russian Eurobonds and from providing non-ruble loans to the Russian authorities.