US, Belarus agree to return ambassadors despite lack of Minsk's progress with human rights 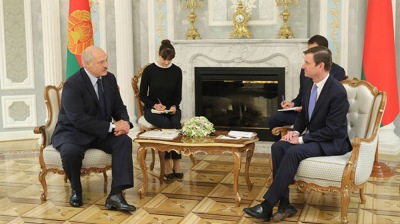 By Sergei Kuznetsov in Minsk September 19, 2019

The US administration and authoritarian Belarus, headed by Alexander Lukashenko, Europe's longest-ruling head of state, have agreed to "prepared to exchange ambassadors as the next step in normalising our relationship", Undersecretary of State David Hale said following his meeting with Lukashenko on September 17.

In 2008, the Belarusian authorities ordered a reduction in US diplomatic staff in Belarus from 35 to five. The move followed US sanctions against state-owned petrochemical conglomerate Belneftekhim, imposed for human rights violations in the country. Minsk, in turn, recalled its ambassador from Washington the same year, recommending that then US ambassador Karen Stewart leave Belarus “for consultations.”

"The US remains committed to a sovereign, independent Belarus with a prosperous future for the next generation," Hale added in a statement published by the US embassy in Minsk. "The United States also welcomes Belarus’ increased cooperation on issues of non-proliferation, border security, economic cooperation, and information sharing on matters of shared security."

Washington began to demonstrate more liberal approach to Minsk after Russia annexed Ukraine’s Crimean peninsula in 2014 and the start of Russia-backed uprising in eastern Ukraine the same year.

Hale also added that by normalising our relationship, “We are not asking Belarus to choose between East and West", anticipating a possible negative reaction from Moscow at the move. "The United States respects Belarus’ desire to chart its own course and to contribute to peace and stability in the region."

"Lukashenko is probably a bit more nervous about Russia since the seizure of Crimea," Steven Pifer, who held talks in Minsk in the early 2000s when he was then deputy assistant secretary of state, told RFE/RL on September 17. "He would like to build some connections to the west just to give himself some balance vis-a-vis Russia."

In September, Russian media reported that Russia and Belarus have inked a roadmap with the aim to form "an economic confederacy" by 2022. Specifically, Minsk and Moscow also seek to unify their customs and energy policies by 2021. The union state tax code is expected to be adopted by April 1, 2021. Russia-Belarus economic confederacy entails the creation of a single tax code, civil code and list of foreign trade rules, in addition to unified oil, gas and electricity market regulators by 2022.

The roadmap, however, does not address integration between the two countries’ state security, defence, law enforcement and judicial domains.

Meanwhile, Western human rights NGOs keep raising issue of the lack of any progress in Belarus in this sphere since 2015, when Lukashenko freed a number of political prisoners.

In recent legislative moves to tighten its grip on digital media, the government in 2018 approved a bill on 'fake news' and adopted amendments to the Law on Mass Media that tightened control over news websites and social media.

"With such progress, we can discuss further easing of sanctions. Belarus is a country with a rich culture and vibrant, talented people. We look forward to increased cooperation and dialogue between our countries," Hale added.