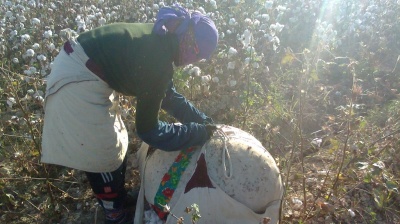 With the lifting of the ban expected to secure much improved export potential for Uzbek cotton products, Tashkent can now concentrate on raising investment in processing cotton from the fields rather than selling it raw.
By bne IntelliNews March 29, 2019

Uzbekistan is celebrating a US decision to lift a market ban on Uzbek cotton and products made with Uzbek cotton that was imposed due to concerns over child labour.

The US Labor Department announced the move in a notice posted in the Federal Register this week. Uzbekistan's Foreign Ministry issued a statement welcoming the change on March 27.

The ban was imposed in 2010. In the past two years, Uzbekistan has taken significant steps towards abolishing the labour practices which campaigners and major brands want to see ended entirely. The Central Asian nation, busy attempting to build an image as a country entering a new era in which it is determined to build up foreign trade and investment, has been introducing both economic and human rights reforms. Under President Shavkat Mirziyoyev, it is attempting to come in from the cold following the death of autocrat Islam Karimov who ruled with an iron fist until late 2016.

A wide range of international brands have maintained a boycott on Uzbek cotton due to the continued use of forced and child labour in Uzbekistan’s cotton industry—however, this boycott might be coming to an end.

In February, Uzbekistan sent a delegation to the US seeking to lift the ban on Uzbek cotton. The delegation held negotiations with both international brands and the representatives of the White House, the Department of State, the Department of Labor and international financial institutions. Mirziyoyev met President Donald Trump at the White House last year and was praised during that occasion by various US officials for his reform efforts.

Questionable findings
The International Labor Organisation (ILO) said in a November 2018 release that most forced labour had been eliminated from the country’s cotton fields. It estimated that 93% of those involved in the 2018 cotton harvest worked voluntarily.

However, rights groups quickly cast doubt on the findings. They criticised the report for not emphasising the importance of eliminating the remnants of involuntary labour in the country.

On January 15, the Cotton Campaign quoted Umida Niyazova, director of the Uzbek-German Forum for Human Rights (UGF), as saying that UGF’s “monitors found that regional and district officials ordered state organisations and businesses to send employees or pay for replacement workers to pick cotton and sign statements stating they were working voluntarily”.

“Some of the forced pickers were from republic-level law enforcement and military agencies, which could not have sent employees without authorisation from the central government,” Niyazova noted.

The UGF’s independent monitors acquired documents demonstrating that around 30% of employees of state-owned enterprises were assigned to cotton-picking brigades. The Uzbek Metallurgical Plant, for instance, was said to have mobilised 36% of its workforce, equivalent to some 3,200 workers, to pick cotton. The UGF based that claim on a document it obtained dated 19 September 2018.

Soviet era legacy
Uzbekistan, one of the world’s largest cotton producers, produced more than 3mn tonnes of raw cotton and 1mn tonnes of cotton fibre annually during Karimov’s reign. Mass cotton production in the country and neighbouring countries was largely a legacy of the Soviet era. The USSR’s misuse of water resources to drive cotton output has often been cited as among the major reasons behind the drying up of the Aral Sea, shared by Kazakhstan, Uzbekistan and Turkmenistan.

After Karimov’s death, Uzbekistan began to diversify its agricultural sector away from dependence on the monocrop. It cut down on the total amount of land allocated for growing cotton. As a result, cotton output fell to 2.3mn tonnes in 2018, down from 2.9mn tonnes produced in 2017. Uzbek authorities have also been attempting to focus on producing finished textile products domestically rather than exporting raw cotton to textile plants abroad.

In 2017, the government announced plans to channel nearly $2.2bn into Uzbek cotton processing projects in the 2017-2020 period, with the end-goal of processing all domestically produced cotton by 2020. Uzbekistan processed 40% of its cotton domestically in 2016, compared to home processing of only 7% in 1991, the year in which the country gained independence following the collapse of the Soviet Union.