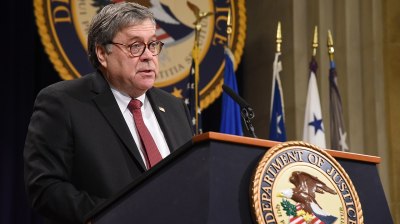 Barr is said to have worked for a settlement that would have meant prosecutors choosing to not move for an indictment of the bank.
By bne IntelliNews February 17, 2020

Southern District of New York (SDNY) prosecutors indicted Turkish state-owned lender Halkbank for evading Iran sanctions after US Attorney General William Barr personally spearheaded an effort last year to negotiate a settlement with the bank that would have allowed it to sidestep such an indictment, a source quoted by CNN has claimed.

Barr is said to have made the move after Turkey's president, Recep Tayyip Erdogan, pressed US counterpart Donald Trump on the matter in a bid to allow the bank to avoid charges.

The CNN report stated: “[…] Southern District of New York prosecutors believe that their leader, Geoffrey Berman, has defended the office's relative autonomy, particularly since Barr's arrival [in his post], according to people familiar with the matter.

“Barr, these people said, has attempted to micromanage certain cases, asking more questions and for more frequent updates than his predecessors on matters from Berman.

“Berman has bristled at those demands, according to these people, and has repeatedly pushed for actions on certain politically sensitive cases in opposition to Justice Department leadership, most notably the indictment in October of the state-owned Turkish bank, Halkbank.”

On February 4, US Democrat Senator Ron Wyden wrote to Barr to query whether Trump had tried to intervene on behalf of Halkbank.

Wyden acted after a federal appeals court granted a temporary halt in the SDNY prosecution of Halkbank  while it weighs other requests by the bank.

Halkbank had previously sought to pursue a dismissal of the case in the SDNY without entering a plea on the charges. A judge denied the request, and the bank is appealing that ruling. A three-judge panel of the Second Circuit Court of Appeals will reportedly weigh the request on an expedited basis.

Prosecutors have described the bank as a “fugitive” from justice. They asked a judge to hold it in contempt and impose fines until it begins answering the charges.

Halkbank has claimed that the US has no jurisdiction to hear the case. It was charged in October with helping Iran access billions of dollars in oil revenue frozen in its accounts under US sanctions. A senior bank executive was previously convicted in the case, and a money launderer pleaded guilty to charges of orchestrating the scheme.

Erdogan was implicated in the alleged sanctions-busting conspiracy during the case that resulted in the conviction of the bank executive, but has strenuously denied the claims against him.

ING: How a post-Covid world could look
Prices for ginger and lemons soar as Russians turn to traditional home remedies to fight coronavirus
OUTLOOK 2020/2021 Iran