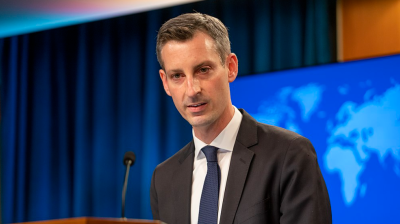 US State Department spokesman Ned Price announced the US was accepting the invitation.
By bne IntelIiNews February 19, 2021

The US has agreed to take part in multilateral talks with Iran hosted by the EU, Washington announced late on February 18.

The aim is to find a way of bringing the US back into the 2015 nuclear deal and to restore full Iranian compliance with the accord.

US State Department spokesman Ned Price said the US would accept the invitation of the EU high representative for discussions with Iran and the five other countries that agreed the nuclear deal (formally named the Joint Comprehensive Plan of Action, or JCPOA), under which Tehran agreed to tight restrictions on its nuclear development programme in return for sanctions relief.

There was no immediate announcement from Tehran on whether it was ready to join the talks. US officials said the timing and location of the talks would be up to the EU hosts, and warned that they were unlikely to lead to a quick breakthrough.

The US delegation for the talks would be led by special envoy Rob Malley, who helped negotiate the JCPOA six years ago.

Enrique Mora, the EU political director and lead negotiator, tweeted an invitation to the planned talks.

“The JCPOA at a critical moment,” Mora wrote. “Intense talks with all participants and the US. I am ready to invite them to an informal meeting to discuss the way forward.”

The US has, meanwhile, dropped special restrictions on Iranian diplomats in New York imposed by the Trump administration. The restrictions limited them to the Iranian mission, the ambassador’s residence, the airport and a six-block radius around the UN building. They will now be subject to the limits that were in force before the Donald Trump era, namely a 25-mile radius around midtown Manhattan.

Social media was buzzing with speculation after Belarus' President Alexander Lukashenko said that he was going to announce a “principled” decision of the last quarter century this week on April 17.

Strong hopes Georgia's political crisis is over after EU brokered agreement
7 hours ago
Bulgaria’s outgoing government under scrutiny over sudden hike in budget deficit
18 hours ago
Team Navalny pulls the trigger on the next big demonstration scheduled for April 21
22 hours ago
Samolet see EBITDA up by half despite the coronacrisis
1 day ago
Will Belarus merge with Russia this week?
1 day ago