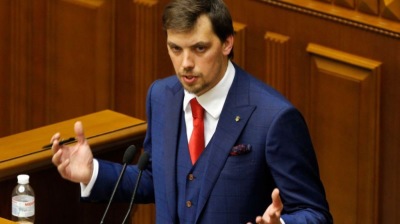 Ukrainian Prime Minister Oleksiy Honcharuk quit in midst of a tape scandal where he claimed President Zelenskiy knows nothing about economics.
By bne IntelliNews January 17, 2020

Ukraine's prime minister, Oleksiy Honcharuk, quit his post on January 16, a few days after being caught on tape saying Ukrainian President Volodymyr Zelenskiy knows nothing about the economy

“I took this post to implement the president’s programme. He is an example of transparency and decency to me,” he said on his Facebook page.

“However, in order to dispel any doubts about our respect and trust for the president, I have written a resignation letter and submitted it to the president for introduction to parliament,” Honcharuk’s statement read.

Rumours about Honcharuk’s departure began to swirl a day earlier as the scandal surrounding the tapes grew.

The prime minister’s office denied reports that Honcharuk had tendered his resignation. The tapes were published in the media and are purportedly from meetings with the National Bank of Ukraine (NBU) where Honcharuk suggested that Zelenskiy has no clue on economics.

“The knives likely are out for Honcharuk given he has come out in favour of land reform and in support of the NBU over the PrivatBank saga,” Tim Ash, senior sovereign strategist at BlueBay Asset Management, said in a emailed comment.

“Sometimes the truth hurts, and the reality is that Zelenskiy is not a trained economist, and while he might be a shrewd businessman, knowing/understanding macro and challenges around PrivatBank et al, are tricky. But the test of a good manager is knowing one's own shortcomings, and hiring talent to fill these and then delegating and supporting the team. To give him credit, Zelenskiy has hired a decent economic team — Honcharuk, Timofeev, Markarova, and is supporting the NBU team.”

The departure of Honcharuk will dent Ukraine’s reformist image, but not damage it, say analysts, as the president remains committed to keeping to his hectic legislative programme that was introduced on the first day of the new government last August.

There are several liberal and qualified candidates in the wings to take over, says Ash.

TURKEY INSIGHT: Follow the (hot) money
4 hours ago
Lukashenko isolated himself from the rest of the world with a secret inauguration
5 hours ago
Iran’s oil minister openly admits forging export documents to dodge US sanctions
6 hours ago
“Putin’s chef” follows through on threat to bankrupt Navalny, bailiffs seize his apartment
14 hours ago
Romania at high risk of downgrade to junk
15 hours ago