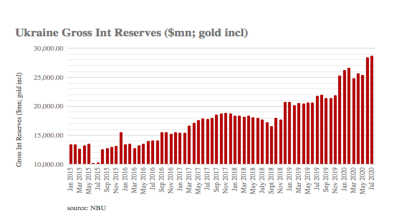 Reserves grew during the month thanks to the government’s successful placement of Eurobonds.

Overall, changes in international reserves during the month were driven by several factors.

First, the government’s servicing of public debt. FX earnings for the benefit of the government in July were $1.8bn, including $1.1bn on the account of sovereign Eurobond placement and $608.2mn – FX domestic government debt securities placement.

At the same time, the government spent $1.5bn (in the equivalent) on servicing and repaying public debt denominated in foreign currency. Of that amount, $767mn were paid for hryvnia-denominated domestic government debt securities, while the rest was paid to discharge obligations to foreign lenders.

Meanwhile, on some days the situation on the FX market was favourable and the NBU encouraged replenishment of reserves on the account of purchased FX currency. Overall, such interventions amounted to $130mn.

Third, the revaluation of financial instruments (due to changes in their market value and in FX rate). Last month, their value increased by $406.3mn (in the equivalent).

International reserves now cover 4.9 months of future imports. This is sufficient for Ukraine to meet its obligations, and for the government and the NBU to conduct their current operations.

As of July 1, 2020, Ukraine's international reserves, according to preliminary data, amounted to $28.5bn (in equivalent).

NBU Governor Kyrylo Shevchenko said in a video address that Ukraine's international reserves may grow to about $30bn by the end of 2020, and to $32bn-33bn in the next years.