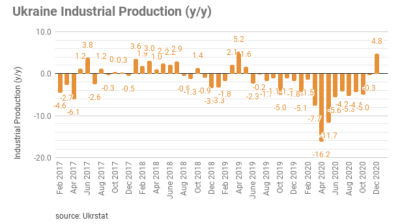 “The increased demand and favourable price situation for iron ore and metals at the external markets helped Ukraine’s industry to advance significantly in December. In addition, the low comparative base of the previous year contributed to the impressive result. Meanwhile, Ukraine’s other major industrial sectors are still failing to show a consistent improvement, showing large month-to-month swings,” Evgeniya Akhtyrko of Concorde Capital said in a note.

“The result of Ukraine’s industrial production in 2021 will largely depend on how long the favourable external conditions for iron ore and metals producers last. Meanwhile, domestically oriented producers are not likely to advance a lot, and any growth they experience will just be a bounce after the recession of 2020. We expect Ukraine’s industrial output will advance 6.5% y/y in 2021,” Akhtyrko added.

The National Bank of Ukraine (NBU) reversed its easing policy and hiked rates for the first time since June 2020 by 50bp to 6.5% at its monetary policy meeting on March 4.

Russia’s services PMI positive at 52.2, but down slightly from January

The seasonally adjusted IHS Markit Russia Services Business Activity Index registered 52.2 in February, down slightly from 52.7 in January. The latest reading signalled a modest rate of expansion that was slower than the long-run series average.

Better performance in Q4 left North Macedonia with a 4.5% GDP contraction for 2020.