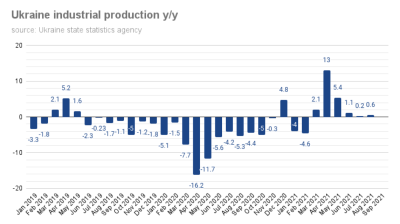 The post-crisis recovery of Ukraine’s industry is very slow. Iron ore production is in decline again, as global markets for this commodity are not booming anymore. The upsurge in metallurgy is slowing amid stabilised external demand.

DON: Blunting the Javelin? – The prospects for NATO participation in a Ukraine-Russia war
Blinken and Lavrov talks break up after 30 minutes
EU challenges China’s Belt and Road with €300bn Global Gateway