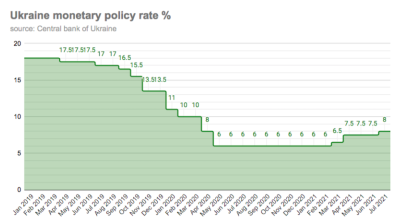 The National Bank of Ukraine (NBU) made a surprise rate hike on July 22, raising the main interest rate from 7.5% to 8%.

The rate hike was the third this year and NBU governor Kyrylo Shevchenko said another increase to 8.5% is planned this year as the central bank seeks to rein in inflation.

“Given the significant increase in underlying inflationary pressures, this step is necessary to return inflation to 5% in 2022 and keep inflation expectations in check,” the NBU said in a statement.

“The NBU’s forecast envisages that the key policy rate will be raised further, to 8.5%, and maintained at that level until Q2 2022, with a view to bringing inflation back to its 5% target in 2022, and keeping inflation expectations in check. If additional pro-inflationary risks materialise, the NBU stands ready to continue deploying monetary tools to return inflation to its 5% target,” the statement added. 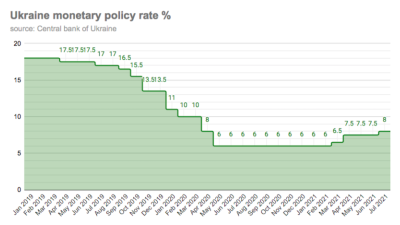 The latest inflation figures were higher than expected; consumer inflation remained flat at an annual 9.5% in June, but this was somewhat above the NBU’s forecast of 9.2%.

According to the NBU, inflation will soon rise to slightly above 10%, but it is then expected to weaken at the end of the year, and return to its 5% target in the second half of 2022.

The higher than expected inflation in June was driven primarily by temporary increases in global food and energy prices, but at the same time underlying inflationary pressures have intensified significantly.

Core inflation accelerated to 7.3% y/y in June, which was "fuelled primarily by sustained strong consumer demand and rising production costs in businesses, particularly in wages,” the NBU said. 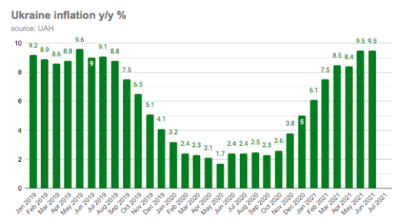 Timothy Ash, senior sovereign strategist at Bluebay Asset Management, suggested a political dimension to the rate increase, which, as he noted, followed flat inflation in June.

“I think this had more to do with the HR changes/pressures around the NBU, and likely Shevchenko trying to bang the line that he is the best defence for [central bank] independence and orthodox policy than anything else,” Ash wrote.

The hike in July comes after the NBU surprised the markets by leaving interests rates on hold in June despite the surge in inflation in May, after raising them in March and April, as countries across Eastern Europe saw inflationary pressure intensify.

Ukraine’s economy is expected to recover this year from the damage caused by the coronavirus pandemic in 2020. “Despite the heavy impact of the first lockdown, Ukraine weathered the crisis better than expected. The Ukrainian economy will return to steady growth starting in the second quarter. NBU expects that in 2021-2023 the economy will grow by about 4% annually,” Shevchenko said in an interview with bne IntelliNews at the end of June.