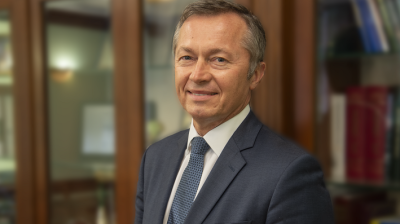 Former NBU governor Oleksandr Pysaruk has a strong reputation in Ukraine's banking circles but was arrested on embezzlement charges
By bne IntelliNews November 12, 2019

The National Anti-Corruption Bureau (NABU), the country's main anti-graft agency, has detained former deputy governor of the National Bank of Ukraine (NBU) Oleksandr Pysaruk among seven people who have been accused of embezzling UAH1.2bn ($49mn) that was part of a NBU loan provided with the aim to stabilise the nation's VAB Bank, which was declared insolvent in November 2014.

NABU detained on November 11 seven suspects in the case, including Pisaruk, CEO at Raiffeisen Bank Aval, who served as NBU deputy governor between September 2014 and December 2015.

The men are accused of misappropriation of funds in a UAH1.2bn stabilization loan that the NBU provided to VAB Bank in 2014, the bureau reported the same day. Current and former officials of the NBU and VAB Bank were detained, the NABU reported, providing no other details on the issue.

VAB Bank was owned by Oleh Bakhmatyuk, whose assets include one of the country's biggest farmland holdings Ukrlandfarming. The businessman also owned Bank Financial Initiative, which was also withdrawn from the market during the 2014-2016 banking crisis.

The arrest is the latest attack on former members of the NBU team that were responsible for closing over a 100 banks during the clean up of the sector. Former NBU governor Valeriya Gontareva has also been accused of wrong doing and criminal cases opened against her.

Pysaruk and Gontareva won widespread praise from Kyiv's donors and western backers for their work in cleaning up the nation's banking sector, having closed around 80 banks that were involved in money-laundering schemes. Gontareva also made the bold decision to nationalise PrivatBank, the country’s largest lender by assets, which belonged to Ukrainian oligarchs Ihor Kolomoisky and Hennadiy Bogolyubov.

Timothy Ash, Senior Sovereign Strategist at BlueBay Asset Management said in a note to clients on November 11 that the NABU's move "will be taken as an attack on foreign banks, and foreign investors in Ukraine - Aval is the largest foreign bank in Ukraine. Idiotic." Ash added that the nation's President Volodymyr Zelenskiy "needs to get a grip of what is happening now with respect to the banking sector". "As I have long argued this will set the tone of his presidency - whether he is an economic reformer, or not."   The arrests come just as the International Monetary Fund (IMF) demands the government attempt to recover $15bn stolen by bank owners that saw their banks closed down but have made no attempt to return any of the assets looted from deposit accounts.

The most notorious of these is Kolomoisky who stole $7.6bn from his Privatbank but is not under investigation and he has ignored orders by the NBU to return the stolen assets with impunity. Today Privatbank is owned by the state and 80% of its loan book is non-performing loans (NLPs) – mostly what the current Privatbank CFO told bne are “fraud loans.”  Ukrainian president Volodymyr Zelenskiy said publicly on November 11 that the government would try to recover the stolen bank money, but the same day the anti-corruption authorities arrest one of the man at the heart of uncovering the stealing at banks, rather than the bankers guilty of doing the stealing.

Raiffeisen issued a statement saying the arrest was nothing to do with Pysaruk’s work at the bank. “The reason for the action was in no way related to the performance of his duties as Chairman of the Board of Raiffeisen Bank Aval,” Raiffeisen said in its statement. “During his tenure at Raiffeisen Bank Aval, Oleksandr Pysaruk has proved himself to be a highly-qualified, competent and professional manager. Martin Grüll, Chairman of the Supervisory Board of Raiffeisen Bank Aval, commented,” We are confident that Mr Pysaruk will be cleared of any suspicion of wrongdoing and that he has always adhered to the highest professional and ethical standards, both at Raiffeisen Bank Aval and for many years at the IMF and other international institutions.” Before joining the NBU, Pisaruk worked as regional head for ING Bank in Central and Eastern Europe. After leaving the NBU, he worked for 3.5 years in Washington as senior financial sector expert at the IMF.

Commenting on Pisaruk’s detention, former NBU Governor Valeria Gontareva said the same evening that “terror is intensifying.” “He and I were cleaning all these Augean stables,” she said, referring to their efforts to rescue Ukraine's banking system in 2014-2015.

In an open letter to President Zelenskiy, Bakhmatyuk asked him to instruct law enforcement bodies to “return to the law and elementary logic.”  It seems like Pisaruk's detention is related to the NBU’s provision of a UAH1.2bn stabilizing loan to VAB Bank in October 2014. The bank was recognized insolvent a month later. As reported by the epravda.com.ua news site, NBU officials are suspected of lending to VAB Bank in violation of banking rules. In particular, NABU suspects VAB Bank did not provide the necessary list of documents when applying for the loan. Also, VAB Bank officials are accused of misappropriating money received from the NBU as the funds were allegedly used to repay related party loans/deposits and were withdrawn from the bank in cash.

“Whatever wrongdoings are alleged, Pisaruk is not the best prosecution target for the Zelenskiy administration. Pisaruk has a strong reputation in Ukraine's banking sector, having worked for the IMF and Ukraine’s biggest international bank afterwards. Most likely, the IMF won’t welcome NABU's move,” Alexander Paraschiy said in a note.

“A different story is Bakhmatyuk, whose reputation in Ukraine is not as solid. NABU’s latest move against him further proves our view that the debts of Bakhmatyuk's companies, including the Eurobonds of Avangardco and Ukrlandfarming, have little value,” Paraschiy added.

Bakhmatiuk said in a letter published on Ukrlandfarming's site on November 12 that the NABU's actions are illegali and asked Zelenskiy to give an order to resolve the conflict at the negotiating table.

"We ask you to intervene in this process. We ask you to stop the appointment of perpetrators without any right to defence. We ask you to define negotiators who can be constructive in this dialogue," Bakhmatiuk's letter reads. The businessman added that he was ready to attract any foreign economic advisers with international experience in restructuring and auditing.

On November 12, Bakhmatiuk told news agency Interfax that he and his Ukrlandfarming agricultural holding have sent an official offer to the nation's authorities as an arbitration manager for the phased repayment of UAH8bn of debts to VAB Bank and Bank Financial Initiative, and on making a UAH500nm guarantee fee.

"Then UAH1bn a year. This offers remains valid, and I am actively working to ensure such financing," he said, adding that that last week he had been actively negotiating in the Middle East, in particular with representatives of Cargill. "I didn't run anywhere, I'm actively working." Bakhmatiuk said that in the coming days he would continue negotiations with trading companies and investors on the previously outlined program, but then he plans to return to Ukraine and will work with lawyers. According to him, Ukrlandfarming annually produces 2.5mn tonnes of grain and under such commodity flows would be able to attract money necessary for the phased payment of debts.