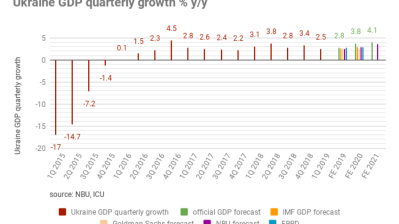 “The surge in the construction sector generated a better-than-expected GDP result in 1Q19. However, swings in the performance of the construction sector are common so they cannot be viewed as a reliably consistent generator of value-added growth in the economy. Meanwhile, the decline in manufacturing – one of Ukraine’s leading production sectors – continues to dampen overall economic growth,” Evgeniya Akhtyrko of Concorde Capital said in a note. “We expect Ukraine’s GDP to increase 2.4% y/y in 2019 (vs. 3.3% y/y in 2018). The slower economic growth will be mostly due to a weaker year-end result in agriculture.”

Turkish lira deposit rates below official inflation
8 hours ago
Hungarian forint slips to all-time low against the euro
4 days ago
Russia’s industrial output grew 2.1% on the year in 2019 and 8.9% on the month in December
4 days ago
Polish retail sales accelerate growth in December
5 days ago
Russia's Watcom shopping index ends 2019 on five-year high as consumption recovers
5 days ago