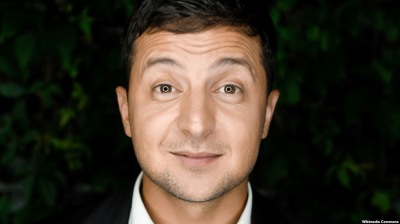 Ukrainian comic and presidential candidate Volodymyr Zelenskiy and President Petro Poroshenko will face each other in the second-round run-off of the 2019 presidential election, say analysts in Kyiv
By bne IntelliNews March 21, 2019

Ukrainian comic and presidential candidate Volodymyr Zelenskiy and President Petro Poroshenko will face each other in the second-round run-off of the 2019 presidential election, Zenon Zawada at Kyiv-based brokerage Concorde Capital predicted in a research note on March 20.

"Being neck-and-neck with [ex-PM Yulia] Tymoshenko, Poroshenko has enough access to state resources to ensure he will qualify for the run-off (using sophisticated manipulations, if need be)," he wrote.

That will draw inevitable protests of vote fraud by the Tymoshenko campaign (accusations of which have already begun), which will be organised on a weekly basis. "The protests will continue to extend beyond the runoff scheduled for April 21, but are unlikely to draw significant public support," Zawada added.

Zelenskiy has maintained a comfortable lead in the presidential race, according to the latest poll released by the Rating Sociological Group on March 19. Among decided voters, 24.9% will cast their ballot for Zelenskiy, compared to 18.8% for Tymoshenko and 17.4% for Poroshenko.

Among decided voters, 49.6% said they won’t vote for Poroshenko under any conditions. In the second-round runoff, Poroshenko would lose to both Zelenskiy (19% vs. 39%) and Tymoshenko (19% vs. 28%). The poll was conducted among 2,500 respondents between March 9 and 15.