Two Iranians with coronavirus die in holy city of Qom, a magnet for pious Shi’ite Muslims from around world 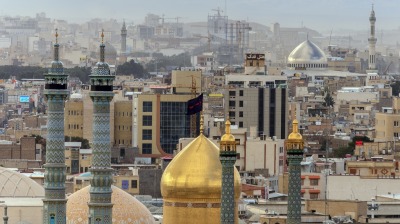 Two men have died from Coronavirus in Qom,
By bne IntellIiNews February 20, 2020

Two Iranian men infected with the new coronavirus (officially the COVID-19 virus) have "died of respiratory illness" in a hospital in the holy Shi'ite city of Qom, head of the city's University of Medical Sciences told Mehr news agency on February 19.

Earlier in the day, ISNA quoted Health Ministry spokesman Kianush Jahanpour as saying “some suspected cases of the new coronavirus were found” over the past two days.

“Medical teams have been deployed in Qom and the suspected persons have been quarantined," he added.

Local reports indicate the two people who died were elderly and had not lately travelled outside of Qom. However, Jahanpour added that at least 25 people have been quarantined in the hospital the victims died in on suspicion that they may have contracted the virus. More than two dozen other people in Qom are also suspected as possibly suffering from the virus and have been placed in cordoned off hospital wards, other reports out of the city said.

Qom is a magnet for pious Shi’ite Muslims from around the world. With the discovery of the two infected men who have passed away, the indication must be that there are several dozen more people in the city who are infected with the virus.

The disjointed private medical system in Iran is not adequately prepared for a significant outbreak of coronavirus and the World Health Organisation (WHO) is currently monitoring the state of Iran’s response to the potential crisis.

The pace of developments in Qom seemingly caught the government off-guard. Elements of Iranian social media were in a state of panic as an unverified letter allegedly from the interior minister was circulated on Twitter. It called on the health minister to not publish a report on the coronavirus and the number of potential victims in the country until this week’s parliamentary elections in the country are over, Radio Farda reported.

Iran has applied safety measures on arrival flights at its airports to control a potential spread of the virus.

The new virus emerged in China in December. Since then, almost 75,000 people have been infected globally. More than 2,000 deaths have been reported, mostly in China.

Iran has plentiful forex for Persian year ahead says president

"Iran has no problem in providing foreign currency until the end of the [Persian] year [in March, 2021]," Iranian President Hassan Rouhani told an April 2 cabinet meeting, citing information he said ... more

The US says it believes that Iran’s Ministry of Intelligence and Security was last November directly involved in the killing of an Iranian dissident in Turkey, according to a Reuters report. ... more

An Iranian state television journalist who is also a medical doctor on March 17 warned that the coronavirus (COVID-19) outbreak could claim the lives of "millions" in Iran if the public keeps ... more