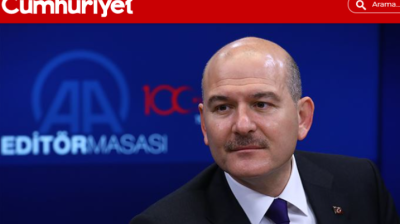 Cumhuriyet reports that social media posts with the hashtag #sensuskel (“Shut up, bald guy!”) and referring to interior minister Suleyman Soylu are being pursued by the police.
By bne IntelIiNews January 13, 2021

Leader of the main opposition Republican People’s Party (CHP) in Turkey, Kemal Kilicdaroglu, has said he will launch a counter lawsuit against President Recep Tayyip Erdogan in which he will demand damages of one lira. Erdogan lately filed a court complaint against Kilicdaroglu over remarks in which the Turkish leader was described as the “so-called president”.

Officials in Erdogan’s ruling Justice and Development Party (AKP) recently hit out at Kilicdaroglu for his description of the president—voiced on January 10 when Kilicdaroglu criticised Erdogan for targeting opposition daily Sozcu—arguing that it was not a proper way to refer to an elected president.

The CHP leader was quoted as saying that their argument was not convincing, adding. “The election does not assign a president. One wins the election to become president, then one has to read the oath in parliament in Article 103 of the Constitution. As long as you stick to that oath, you are the president of 83 million, nobody can object to that,” he said.

The CHP, he added, has always respected the will of the nation, but “the person chosen by the nation should be respectful to the nation” as well.

“Respect must be mutual. If there is no mutual respect, there is no respect. Did he stick to this oath?” Kilicdaroglu asked.

An investigation was launched last year against lawyer Tugay Bek for calling Soylu "the bald-headed person". Bek was charged with "insulting a public officer", but the prosecutor opted to not proceed any further with the investigation.

Cumhuriyet reported that a further investigation has been commenced against one of Bek’s clients for calling Soylu bald.

“The fact that even calling the minister of internal affairs ‘bald’ is the subject of an investigation… is a clear indication of how much the limits of freedom of expression have been narrowed,” Bek was cited as saying.