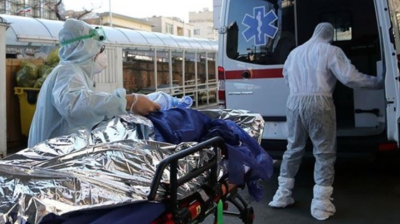 There's a consensus that the coronavirus outbreak is resurging in Turkey but the ruling politicians and doctors remain in open disagreement over how hard the pandemic has hit the country so far.
By bne IntelIiNews September 22, 2020

The ultra-nationalist party that serves as the junior coalition partner in Turkey’s Erdogan government has responded with vitriolic criticism to the Turkish Medical Association’s (TTB’s) repeated claims that the country’s official coronavirus (COVID-19) case figures do not correspond to reality.

The TTB was guilty of treachery and should be shut down, said Devlet Bahceli, who heads the Nationalist Movement Party (MHP) that sustains the parliamentary majority of President Recep Tayyip Erdogan’s Justice and Development Party (AKP).

“The Turkish Medical Association is as dangerous as coronavirus and is disseminating threats,” Bahceli also said in a tweet, adding: “The Medics Association which carries the word ‘Turkish’ in its name should immediately and without delay be shut down.”

Both doctors and politicians agree the coronavirus pandemic is resurging in Turkey, but the latest official coronavirus figures—with new cases running at around 1,600 per day and the average daily number of COVID-19 deaths, at around 60, up threefold on what was experienced between June and August—are widely scoffed at by medics on the ground.

“The numbers of just one city, or the numbers unveiled by just one or two medical chambers are almost equal to the [official] numbers for the whole country,” doctor Halis Yerlikaya on September 20 told Reuters at a hospital in the southeastern province of Diyarbakir.

“This process is not handled transparently,” added Yerlikaya, who is a member of the TTB central committee.

Doctors across Turkey wore black ribbons this week to commemorate colleagues who have died from COVID-19. The ribbons are part of protests that include a social media campaign with a message for the government: “You can’t manage it; we are exhausted”.

“We have tried to convey the voice of our colleagues who caught COVID-19, who are fighting for their lives in hospitals… Therefore we kicked off these protests,” Yerlikaya said.

On September 21, the TTB released a report on the first six months of the COVID-19 pandemic in Turkey.

Speaking at a press briefing, as cited by bianet, TTB chairman Sinan Adiyaman said: "In the last weeks, we have been losing one or several healthcare workers almost every day. We are afraid that this picture will get worse from autumn.”

He added: "Would there be this many patients and deaths in Turkey if the recommendations of the Turkish Medical Association were implemented and a constructive, open, equalitarian outbreak control coordination was maintained with us?”

Referring to the ending of Turkey’s selective lockdowns, the TTB report said: "The outbreak accelerated as a result of the uncontrolled process that we call 'reopening' and the government calls 'normalisation'. The outbreak that cannot be managed is tiring, exhausting and killing health workers and physicians!"

The report concluded: "We expect the Ministry of Health to urgently give a positive response to our demands that we conveyed to them.” These demands include regular PCR coronavirus tests for health workers and not making those who have a negative PCR test result, but nevertheless display clinical evidence of COVID-19, work.

Health Minister Fahrettin Koca last week dismissed the association’s criticism of the official coronavirus data. He said earlier this week that he has repeatedly highlighted the threat posed by the growing numbers and has not played down the challenges facing hospitals.

“I say the situation is troublesome. I say the number of critical cases rose 100% compared to last month,” he told journalists at a press briefing. “I unveiled the number of deaths which is 4.5 times more than last month.

“But there is absolutely no mistake in the chart that we have released … in terms of the burden on healthcare.”

BEYOND THE BOSPORUS: The individual called Albayrak rules out stricter capital controls

Polls indicate Sunday’s vote will set up a rematch of the 2016 runoff between President Dodon and his pro-EU challenger Maia Sandu — but this time Sandu has a strong chance of winning despite top Russian officials’ backing for Dodon.

Ukrainian President Volodymyr Zelenskiy was scrambling on October 29 to head off a crisis of confidence in his government that could end the current International Monetary Fund (IMF) $5.5bn stand by agreement and right to visa-free travel to the EU

No restrictions on movement yet despite spike in new infections, but fearful Sofia residents stay home.

The Russian residential real estate developer Samolet Group has set its IPO price at RUB950 per share in a rare listing on the Moscow Exchange that starts trading today that values the company at c.$750mn

Pro-EU opposition has its best-ever shot at winning the presidency in Moldova
19 hours ago
Zelenskiy scrambles to defuse anti-corruption crisis of confidence in his government
13 hours ago
Lukashenko closes borders, sends top aides to western regions to face down faux NATO threat
1 day ago
Sofia streets empty as most of Bulgaria put in coronavirus “red zone”
1 day ago
Russian residential real estate developer Samolet Group IPOs at a price of RUB950 per share
1 day ago