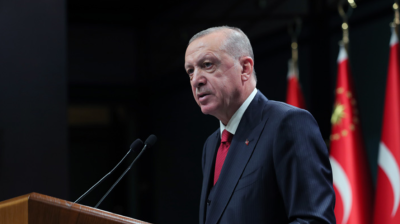 Erdogan speaking after a cabinet meeting on October 11.
By bne IntelIiNews October 11, 2021

The Turkish lira (TRY) fell through the 9.00 per dollar threshold to its latest all-time low on October 11. The currency is enduring another bout of weakness with the markets concerned that Turkey’s central bank in late September cut interest rates despite high and rising inflation.

The TRY stumbed to 9.0123 against the USD, marking a 0.5% decline on the day. The currency fell 6.5% in September and has continued to fall in October. “TRY @ 9, big level. Over 12 against Sterling, insane but reflective of bad monetary policy settings and [Turkish President Recep Tayyip] Erdogan’s failure to accept economic gravity,” tweeted Timothy Ash at BlueBay Asset Management.

The move to below nine came with a stronger dollar leaning on emerging market currencies but heavy domestic factors are weighing on the lira’s fate.

“CBRT [Central Bank of Republic of Turkey] has made lira vulnerable with its narrative on low rates despite high inflation and caused another major sell-off in the lira,” Piotr Matys, senior currency analyst at InTouch Capital Markets, said.

Markets were also concerned at Turkish President Recep Tayyip Erdogan hinting at a possible military offensive into neighbouring Syria, where Turkey-backed rebels are lined up against forces loyal to Syrian President Bashar al-Assad.

But it is the widely-held belief that Erdogan is at the helm when it comes to Turkey’s monetary policy, and is again pushing for more stimulus despite stubborn inflation, which has been giving investors a particularly perplexing and growing headache. The central bank has been using the argument that core inflation is trailing annual inflation to justify monetary loosening. However, even though the regulator may have done the Turkish president’s bidding with the rate cut, there are reports that Erdogan is “cooling” on central bank chief since March Sahap Kavcioglu. Prior to his appointment of Kavcioglu, Erdogan fired three central bank chiefs in a period of around 20 months over policy disagreements [Editor's note: Erdogan fired three more monetary policy committee members late on October 13].

Erdogan’s political fortunes also imply more instability may be ahead. With Erdogan and his AKP party in serious trouble in the opinion polls, six Turkish opposition parties are stepping up collaboration in their bid to topple the president and ruling coalition in elections due by June 2023. The parties said they plan weekly meetings to agree shared principles by year-end.

"The opposition in Turkey is trying something that has never been tried before: getting united to confront the government," political commentator Murat Yetkin was cited by Reuters as saying last week.