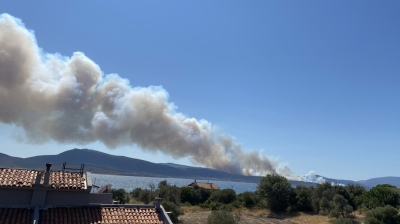 Smoke pours from a wildfire that broke out in Urla, Izmir Province.
By bne IntelIiNews August 9, 2021

Turkey’s forestry agency has this year spent more than 10 times more on basketball teams than on firefighting, financial records of the body cited by the main opposition Republican People’s Party  (CHP) showed on August 9.

The revelation about the apparent strange priorities of the General Directorate of Forestry (OGM) will add to the storm of criticism directed at the Erdogan administration for being unprepared for the wildfires crisis that has devastated parts of Turkey in the past two weeks. The government is already taking flak for having had no water-bombardment firefighting planes to send into action when the infernos broke out. It has responded to its critics by claiming that the “HelpTurkey” hashtag on social media is being used by conspiratorial opponents posting messages to portray Erdogan officials as incompetent and humiliate the country by saying it is in desperate need of foreign help to confront the fire disaster. Legal action is being pursued by the government against dozens of social media users. Turkey is relying on firefighting planes brought in from several regional countries in its battle against the fires. By August 10, only around half a dozen were still burning.

The obtained agency records show that the OGM, which has an annual firefighting budget presently standing at Turkish lira 193mn ($22.3mn), spent TRY40mn in the first half of this year on the Ormanspor men’s and women’s basketball teams. In the same period, the OGM spent only TRY3.4mn on projects and equipment for preventing and combatting forest fires.

“The OGM has an annual allowance of more than four billion lira and only 190 million lira of this has been allocated to fight the fires, of which only 3 million lira has been used,” said Murat Emir, a CHP lawmaker, who has submitted a written question on the matter to Agriculture and Forestry Minister Bekir Pakdemirli.

“However, when we look at the budget allocated to Ormanspor, we see that almost 40 million lira was spent. This budget is almost four times the size of that of Besiktas [basketball club], who played in the semi-finals of the basketball league,” he added.

Turkey has a history of public bodies funding sports clubs that play in the professional leagues.

Emir queried some of the spending at Ormanspor and said it had not disclosed the amount spent on players’ wages.

“The OGM budget was planned as though there weren’t going to be any fires,” Emir concluded.

The OGM posted a statement on Twitter, but later deleted it. The tweet described the suggestions about its spending as “far from reality”.

An OGM statement said that there was a total budget of TRY1.5bn for aircraft and land vehicles in 2021 and it would be “spent by the end of the year”.

“What’s the source of the 1.5 billion lira?” Emir responded. “Will you spend it after the forests are burnt to the ground?”

Eight people are known to have died in the wildfires disaster, while thousands of homes, businesses and herds of livestock were lost as flames swept across mostly southern parts of Turkey, including in areas around the country’s Mediterranean and Aegean coastal resorts.

The extent of some of the devastation can be seen in released drone footage.

In a television interview on August 4, Turkish President Recep Tayyip Erdogan said the opposition was spreading a “terror of lies” concerning the firefighting operation. He claimed his government had handled natural disasters professionally during its 19 years in power.

The pro-Kurdish Peoples’ Democratic Party (HDP) has requested an investigation, alleging fire preparations and responses were late and insufficient.

Kiril Petkov, seen as a contender to become Bulgaria’s next prime minister, was found to have broken the law by holding dual citizenship while serving as caretaker minister.