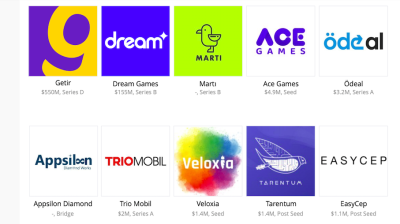 Spot the present and future unicorns.
By Akin Nazli in Belgrade August 8, 2021

Online payments service Odeal was among the top fundraisers in Turkey in the second quarter, Startups.watch’s quarterly report showed on July 26.

In the Union of Chambers and Commodity Exchanges of Turkey's (TOBB's) Fastest Growing Turkish Companies ranking for 2020, Odeal ranked 20th with TRY5-20mn of revenues.

A total of 63 Turkish start-ups raised $746mn in Q2, bringing the overall H1 figures to 129 deals worth $1.26bn, according to data compiled by Startups.watch.

Both the Q2 and H1 figures for funds raised suggest record highs, thanks to rapid grocery delivery firm Getir and Dream Games.

There are currently some Turkish start-ups with potential valuations standing at over $1bn and these companies will be promoted as unicorns when they raise funds, StartupMarket CEO Serkan Bagce told local business daily Dunya.

Meanwhile, there are a total of 46 Turkey-focused funds with investment volumes standing at over $1bn, according to Bagce.