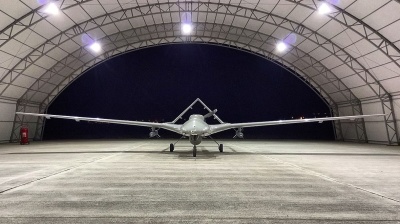 An armed Bayraktar TB2 as used by the Turkish Armed Forces.
By bne IntelliNews December 14, 2019

Turkish drones escorting ships seeking gas and oil in the eastern Mediterranean are reportedly to fly from an airport designated by the Turkish Cypriot cabinet of the breakaway internationally unrecognised state of Northern Cyprus.

The move is likely to dial up tensions with the European Union, already primed to throw sanctions at Turkey over what it agrees is illicit drilling off the Republic of Cyprus and deeply unhappy by a maritime borders deal struck between Ankara and the Libyan government that Greece says ignores the presence of the Greek island of Crete.

Unmanned aerial vehicles (UAVs), both unarmed and armed, will start to take off from Gecitkale Airport as of December 16, Demiroren, a private news agency, reported.

Experts sent from Ankara had assessed the airport, also known as Lefkoniko, as suitable it said.

Cyprus, an EU member, was divided in a Turkish invasion in 1974 triggered by a brief Greek-inspired coup.

Turkey began seeking hydrocarbons off the coast of Cyprus earlier this year. It dispatched two drill ships and an exploration vessel with UAVs escorting them for monitoring and protection. Turkey is reportedly in the market for a third drill ship.

Ankara claims that some areas Cyprus deems part of its exclusive economic zone are either on the Turkish continental shelf or in areas where the breakaway Turkish Cypriot state has rights over any identified resources.

Turkey’s president Recep Tayyip Erdogan, meanwhile, has talked of Turkey exploring for gas and oil in Mediterranean areas agreed under the deal with the Libyans. Egypt is another country unhappy at the maritime borders agreement.

Turkey is on its way to becoming the second biggest user of armed drones in the world.

In late November the Guardian reported that Turkey was able to circumvent a US export ban on killer drones with the help of a missile component first developed in the UK.

The assistance reportedly enabled Ankara to become an emerging power in the lethal technology.  The Hornet missile rack was devised by EDO MBM Technology, located on the outskirts of Brighton, in southern England. An article in Jane’s Defence Review from May 2016 shows the Hornet was supplied to Turkey’s Baykar, the manufacturer of the Bayraktar TB2 drone, at the crucial initial development stage. The Turkish company went on to develop its own missile racks.

The Hornet is a sophisticated piece of equipment, described by some experts as “the intelligent hand” that ensures that munitions fired from a drone are released properly away from the drone and onto the target coordinates specified.

The Bayraktar TB2 drone has, according to the report in the Guardian, “revolutionised Ankara’s operations against the [outlawed Kurdish group] PKK in south-east Turkey and in northern Iraq, severely limiting the group’s movements. Capable of 24-hour flights at an altitude of 7,300 metres and carrying a payload of 150kg, the TB2 is well-armed and is a source of Turkish national pride.

“Video footage of a TB2 destroying a huge portrait of the PKK founder, Abdullah Ocalan, on Darmiq mountain near Afrin was widely celebrated across the country—so much so that it even led to the creation of a smartphone game where the player can operate an armed drone in Afrin, a Kurdish region in Syria until Turkey occupied it in 2018”.

Turkey may be able to rely on the UK again as it seeks to develop its own fifth generation fighter jet. Erdogan and British Prime Minister Boris Johnson have discussed speeding up work on the TF-X joint fighter jet project to help meet Turkey’s defence needs, Turkish Foreign Minister Mevlut Cavusoglu told local broadcaster A Haber on December 11.