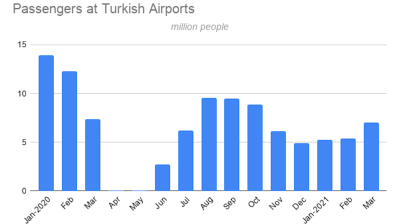 It was on March 11, 2020, that Turkey officially confirmed its first coronavirus (COVID-19) case. March 2021 saw a relaxation of pandemic restrictions that quickly led to a big resurgence in the country’s coronavirus outbreak.

At end-March, the company had 362 aircraft.

Also on April 13, Turkish low-cost carrier Pegasus Airlines said in a stock exchange filing that its number of passengers fell 4% y/y to 1.29mn in March and 45% y/y to 3.4mn in Q1.

Also in the first quarter, the number of passengers served at Turkey’s 52 airports declined 47% y/y to 18mn.

April might see hoped for recoveries in passenger volumes hindered by the reintroduction of partial virus lockdowns in Turkey, Russia’s VTB Capital said on April 14 in a note.

On April 15, Turkish Airlines said that it will run just one weekly round-trip flight to and from Russia after Moscow on April 12, pointing to Turkey’s worsening coronavirus situation, put a block on flights to and from Turkey that will last until June 1.

Turkish Airlines does not participate in facilitating the main tourist flows between Russia and Turkey as that market is dominated by charter airlines, VTB said on April 14 in a separate note.

The air border closure is in VTB’s view likely to last for two to three months.

The Russian brokerage house added that it does not expect Turkish Airlines to require any bailout in 2021.

A potential exclusion of Turkish Airlines from the MSCI Turkey index in May could drive $117mn of passive outflows, half of average daily trading volume across last month, according to VTB.

Turkish Airlines is currently a borderline deletion candidate and its fate in the index will depend on both its share price and the prices of other constituents. At current prices, the stock would be excluded from the index.

Other risks for sentiment come from any political turbulence in Turkey, the Russian brokerage house also observed.

On April 15, Turkish Airlines said in a stock exchange filing that it has reached a restructuring deal with Boeing on deliveries of 75 previously ordered B737 MAX aircraft.

The airline has cancelled 10 MAX orders and converted 40 into options, exercisable by end-2021.

Deliveries of another 13 planes have been rescheduled based on Turkish Airlines’ operational and financial capacities.

A total of 68 planes would be delivered by 2024 based on the actual deal, VTB recapped in a note.

On April 13, the airline announced the appointment of some board members in a stock exchange filing.

Tourism’s long road to recovery
DATACRUNCH: the bne car ownership/age index
ISTANBUL BLOG: Meet “The Botox”, the mafia boss who’s singing like a canary about the Erdogan regime on YouTube

Ukraine’s GDP fell 1.1% in the first quarter of this year in seasonally adjusted terms compared to the same period a year ago, the state statistics committee said on May 14.

Poland is about to reopen nearly in full this month in line with the vaccinations being rolled out to more and more people.

Biggest contributors to the annual rise in inflation was a 10.7% y/y hike in transport prices.

Ukraine’s GDP falls 2% in 1Q21
7 hours ago
Poland’s GDP eases fall to 1.7% y/y in Q1 in harbinger of recovery
7 hours ago
Consumer prices rise 2.1% y/y in Croatia in April
20 hours ago
Romania’s inflation up in April on higher fuel and electricity prices
3 days ago
Romania’s net wage hits record €726 in March
3 days ago