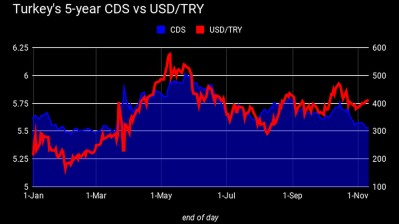 The Turkish Treasury will on November 14 receive the proceeds from the sale of $2.5bn of 5-year eurobonds, according to a finance ministry statement.

The bookbuilding for the issue was concluded on November 7 with a 5.60% coupon and a yield to the investor of 5.70%, while the total amount was at the same time swapped into a EUR liability at a coupon rate of 3.319%.

The spread over US Treasury paper fell sharply to 407bp from the 470bp seen at the previous Turkish eurobond sale held in July.

Mersin Port is also in the eurobond market. Latest information suggested on November 7 that the initial price guidance for its 5-year eurobond was set at more than 5%.

It was reported on October 18 that flag carrier Turkish Airlines had mandated lenders for eurobonds or Enhanced Equipment Trust Certificates. However, nothing has been heard of the move since then.

On November 8, government-run Vakifbank received approval from the Turkish capital markets board (SPK) to issue €1bn worth of mortgage-backed securities abroad.

Eurobond issuers across the Emerging Europe and Eurasia regions have in general been active since last month.

The Turkish Treasury on November 7 successfully redeemed $1.5bn of 10-year eurobonds that were issued in September 2018 and paid a 7% coupon.

Tallying the redemption and sale on November 7, the Treasury has redeemed a total of $3bn and €1.25bn this year, while raising a total of $11.2bn in eurobond sales.

The next scheduled eurobond redemption is set for May 18, 2020. A repayment of €2bn for 10-year EUR-denominated papers is scheduled. Also in 2020, the Treasury will, on June 5, redeem $2bn in 15-year USD papers. On December 3, it will redeem JPY60mn in samurai bonds.

For the Turkish real sector, the next scheduled eurobond redemption is scheduled for April 24, 2020 when Koc Holding will repay $750mn (XS0922615819), debt which was already refinanced in March this year.