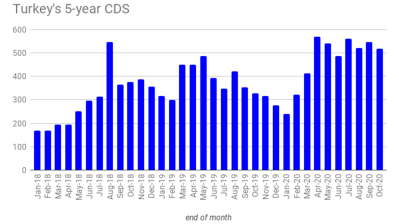 Ulker Biskuvi (ULKER), Turkey’s leading confectionery maker owned by Yildiz Holding, has mandated Merrill Lynch, JPMorgan and HSBC to hold investor meetings from October 19 in the UK and US to sell eurobonds, the company said on October 19 in a stock exchange filing.

The ultimate decision on whether to move ahead with a bond issuance and the amount and terms of the issue will be determined based on market conditions after the investor meetings, it added.

On October 16, Ulker said it has received approval from the Turkish Capital Markets Board (SPK) to sell up to $750mn of papers abroad.

Three days later, Fitch Ratings assigned a first-time rating of ‘BB-(EXP/Expected)-Negative’, three notches below investment grade to Ulker and its upcoming senior unsecured eurobonds. It was issued in parallel with Turkey’s sovereign rating and country ceiling. The assignment of final ratings will be contingent on the receipt of final documents conforming to information already received and the refinancing of a syndicated loan due in November 2020 with eurobond proceeds, Fitch noted.

Also on October 19, Standard & Poor’s assigned a first-time rating of B+/Stable, four notches below investment grade, to Ulker and its upcoming paper in parallel to Turkey’s sovereign rating.

S&P also noted that Ulker will use the proceedings from eurobonds to refinance its Turkish lira (TRY) 3.7bn worth of debt, 43% of the company’s total debt, due November this year.

In 2006, Ulker said in a stock exchange filing that it established a Luxemburg-based subsidiary, namely Ulker Finance SA, and it mandated ABN Amro and Dresdner Kleinwort to sell eurobonds.

However, the auction was not held and subsequently Ulker Finance appeared to have been liquidated.

In 2018, Yildiz struck a deal for Turkey’s largest ever debt restructuring, covering $6.5bn of debt. It restructured the debt again, in August this year.

Turkey’s two eurobond deals this year—both of them sovereign—compare with as many as 18 in a normal year, Mustafa Bagriacik of JPMorgan told Bloomberg on October 20.

'More of a cost concern'

“Corporate issuances are more of a cost concern rather than a matter of accessibility. We have a strong pipeline for the upcoming period,” Bagriacik added.

JP was among the bookrunners for the Turkish Treasury’s latest $2.5bn 5-year auction, which priced at more than 600bp higher than US Treasuries.

On October 20, BloombergHT reported that the Turkey Wealth Fund (TWF/TVF), had cancelled an auction for the sale of 5-year USD eurobonds after holding investor meetings on October 13.

Asked for yields over the sovereign from investors were higher than Turkish officials expected, a person familiar with the matter told Bloomberg News. TVF was set up as a sovereign wealth fund (SWF) by Ankara even though Turkey lacks vast natural resources to generate profits for it, the usual process that a country pursues with an SWF. President Recep Tayyip Erdogan sits at the head of the fund.