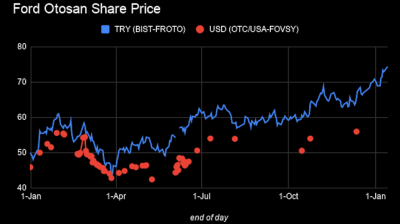 VTB said that Tofas’ weak export result “does not affect export cashflows due to take-or-pay arrangements”.

“According to agreements signed with Fiat, PSA and Opel/Vauxhall, Tofas can charge fixed costs, borrowing costs and a mark-up where lower than agreed upon units are demanded by contracted parties. Accordingly, even in environments of contraction, Tofas can increase profitability… the company is currently break-even in agreed units, and thus no additional margin is derived by the take-or-pay contract in upcoming years,” Seker Invest noted on January 14 in its equity strategy for January entitled “Quietly Optimistic”.

Tofas is a steady dividend payer; it has been steadily distributing dividends since FY2005, Seker added.

Tofas’ 24.6% stake was listed on the Borsa Istanbul while free-float shares amounting to 37.9% in the company were held by foreigners, according to Seker.

The automaker is in VTB’s view better exposed to the recovery of the domestic market, while the forthcoming announcement of the New Doblo contract might serve as another potential share price trigger.

Ford Otosan's export sales rose by 4% y/y to 29,948 units in December alone after three consecutive months of decline “which the company explained earlier [as caused] by supplier issues”.

This might indicate that these issues have been resolved, according to Bespalov.

VTB said Ford Otosan might benefit from future cooperation between Ford and Volkswagen, as well as its plans to boost exports of heavy trucks.

In particular, the company plans to increase the geographic footprint for its truck sales from 43 countries in 2019 to 81 countries by 2024.

Ford Otosan has distributed regular dividends since 2004 with an average pay-out ratio of 50-60%. In FY2019, it distributed Turkish lira (TRY) 3.66 of dividends per share with a dividend yield of 5.0% through 2018 net income, according to Seker.

Seker appreciated Ford Otosan’s business structure, which is settled on exports, and its profit orientation on the domestic market.

Although the Istanbul-based brokerage takes an optimistic approach towards the business structure of Ford Otosan, it considers the company’s laudable performance already priced in.

Yet growth in the business (organic growth + partnership with VW), being a regular dividend payer and having a natural FX hedge lead Seker to think that Ford Otosan should feature in long-term portfolios to mitigate the potentially negative effects of Turkey’s political and economic fluctuations.

Ford Otosan’s 20.5% stake was listed on the Borsa Istanbul with free-float shares equivalent to 41% of the company held by foreigners, according to Seker.

Oyak Renault, a JV between Renault and local conglomerate Oyak, was the largest vehicle exporter in Turkey at 295,275 passenger car units in 2019 while Toyota exported 227,019 passenger cars and Hyundai Assan 169,803 units.

TURKEY INSIGHT: Follow the (hot) money
3 hours ago
Lukashenko isolated himself from the rest of the world with a secret inauguration
5 hours ago
Iran’s oil minister openly admits forging export documents to dodge US sanctions
5 hours ago
“Putin’s chef” follows through on threat to bankrupt Navalny, bailiffs seize his apartment
13 hours ago
Romania at high risk of downgrade to junk
15 hours ago