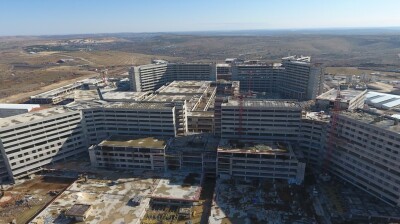 Gaziantep City Hospital. The only things missing in the photo are a city and a hospital.
By bne IntelIiNews January 24, 2021

A consortium that has delayed the construction of the planned €600mn and 1,875-bed Gaziantep City Hospital in Southeastern Anatolia, Turkey under the public-private-partnership (PPP) model is looking to restructure €483.5mn worth of loans, unnamed people with knowledge of the matter told Bloomberg on January 22.

Partners of the consortium are in the process of choosing consultants to first help resolve governance issues among the partners and then to manage talks with creditors.

They reportedly aim to extend the maturity of the loans and they do not seek new loans.

In 2016, the consortium obtained an 18-year syndicated loan from a  group of lenders including the Export-Import Bank of Korea and the European Bank for Reconstruction and Development (EBRD).

Samsung C&T Corp has a 26.5% stake in the consortium while each of Italy’s WeBuild Spa (previously Salini Impregilo), Turkey’s Kayi Insaat and Actus Asset Management have 24.5% stakes.

The Turkish Health Ministry has previously said it wanted the hospital project to be completed in 2021.

Recently, consortia building city hospital projects in Turkey have been queuing to restructure their loans.

The government has since 2015 entered into the building of 18 city hospitals worth a total of more than $10bn under the PPP model.

After construction works were delayed due to financing problems, the government extended guarantees for loans.

The government will provide medical staff and private partners of the hospital projects will supply non-medical equipment and services over the course of 25-year contracts.

Turkey is to pay $81bn in usage and service fees to the city hospital consortiums over 25 years, according to calculations made by Ugur Emek.

The contractors behind Turkey’s mega infrastructure voids, along with energy, construction, tourism, airline and retail companies, and a great number of small and medium sized enterprises (SMEs), have all been pulled into debt restructuring spirals since 2016.