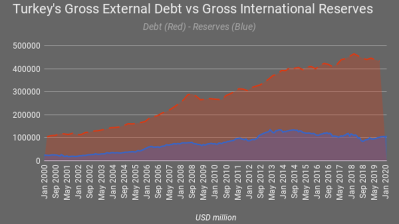 As president of the European Central Bank Christine Lagarde on March 11 warned that the coronavirus crisis could cause a financial crash on the scale of 2008, EM markets such as Turkey were examining where on the bond markets the carnage might eventuate.

With emerging market bond funds already seeing outflows, many fund managers are frantically trying to raise cash in preparation for what the next week may hold with investors gripped by the “disastrous” performance numbers generated over the past few days, Global Capital reported on March 10 in a story entitled “EM funds fret worse outflows and forced selling is to come”.

“What I’m mostly worried about right now is that when people see the performance of EM funds over the last few days there’s going to be a knee-jerk reaction to get out of there and we’re going to see redemptions and forced selling,” one unnamed fund manager told the publication.

“Emerging market bond valuations were in free-fall on Monday [March 9], after a collapse in the price of oil gave investors yet another reason to worry about the global economic outlook,” the publication reported on March 9 in a story entitled “‘No place to hide’ in EM as oil crash smashes bonds”.

“If the recent tightening of external financing conditions is sustained, it would result in severe balance of payments strains for the usual suspects Turkey and Argentina as well as some of the smaller EM oil producers,” he wrote.

“The dust is still settling following the turmoil in markets on Monday. But it’s clear that external financing conditions for EMs have worsened. The spreads on EM sovereign dollar bonds have widened by 50-100bp since the start of the month. In many EMs, bond spreads have neared levels seen during the crisis fears of early-2016 and mid-2018. This will make it much more costly for EM governments and companies to borrow from abroad. And foreign investors may become more reluctant to invest in emerging markets,” he added.

Turkey is among the countries that have large short-term external debts and limited FX reserves while lira depreciation over the rest of the year could cause balance sheet strains in Turkey due to the large amount of FX debt in the private sector, Capital noted.

Talks between Turkey’s IC Yatirim Holding, China Merchants Group and a group of Chinese banks to refinance a $2.3bn loan have been delayed due to coronavirus woes, some unnamed people with knowledge of the matter told Bloomberg on March 10.

The Turkish government, meanwhile, has managed to ‘zero’ the reliability of its balance of payments data via some revisions. The Erdogan administration is getting ready to release data forecasting for 5% y/y GDP growth and a positive or relatively limited current account balance for 2020.

“We think the credibility of the data will be questioned due to the large positive impact of the revision,” an unnamed economist told Reuters on Monday 11 after the central bank revised the 2019 current account surplus up to $8bn from the previously-announced $1.7bn.

The $1.8bn January deficit was a significant improvement on the $2.5bn forecast.

He talked about Idlib, “CHP general manager Mr. Kemal”, Greece, Nazis… and declared: “No virus is stronger than Turkey.”

On March 10, a professor of medicine died after apparently jumping from the eighth floor of Ege University Medical Faculty Hospital in Izmir after leaving a note: “I took a huge loan, I can’t repay”.

Some meetings would be held on March 11 after the official announcement of first coronavirus case on March 10. School holidays were being discussed during the day.

As of 16:31 GMT on March 11, Turkey’s official coronavirus infections count stood at one. There are plenty of opinions about that. Try here and here.

Head of the Turkish food retailers association (GPD) and COO of largest discount supermarket chain BIM, Galip Aykac, told BloombergHT on March 11 that the sector was ready to provide uninterrupted services with its inventories and personnel.

Emerging markets capital markets have been through a revolution in the last decade, but the coronavirus pandemic and rising political and economic risks in some markets have seen these investors turn tail and flee.

The opposition leaders called for a general strike in Belarus on August 11, two days after the disputed presidential election. It flopped. But as details of brutal police beatings came out two days later one company after another walked out on strike