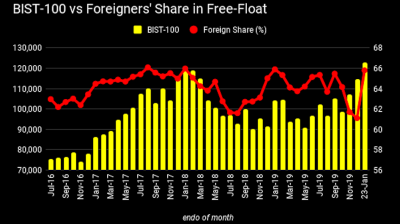 Borsa Istanbul investors have since December been busy swatting away the sceptics after the foreign-held share of equities traded on the stock exchange fell into the 58%s for the first time since 2005. The sharp fall was acknowledged but the idea that it was caused by capital outflows was rebutted. It was all down to some negligible reasons, if the defenders of the stock market were to be believed.

Turkey watchers of course are accustomed to this kind of thing. The central bank sharply cuts its policy rate and the lira shows its muscles. It’s all quite normal on the Turkish markets. And the bulls can always work their imaginations to reason why things are so and are nothing to worry about.

It is actually impossible to satisfactorily pin down the data on foreign holdings in Borsa Istanbul stocks as the available figures include “foreigners with moustaches”, or “the moustaches”, short for Turks that trade via foreign brokerage houses. The accounts they are said to use, whether in reality representing foreign or Turk investors, generally perform high volume transactions with a big impact on headline share prices. Thus, observers of the Istanbul stock exchange naturally follow the “foreign share” to obtain some kind of gauge of capital flows into or out of the market.

But on January 22, Tuzun added: “The Turkish equity market has seen a significant re-entry of foreign institutional money in January."

Tuzun also said: "However, it is not easy to track the actual amount of re-positioning, based on Takasbank’s (Central Custody in Turkey) T-2 dataset. The historical foreign ownership data we used to track (i.e. the Takasbank data) has become a bit irregular of late, with significant volatility."

"It could be argued,” Tuzun continued, “that this was due to the extreme share price increase in Finansbank (QNBFB). Finansbank’s real free float is actually 0.12%, but if QNB's 99.88% stake, which is registered in the equity market, were to be considered as free float by Takasbank, the weighted average foreign ownership of the whole equity market would increase irregularly. However, if this was true, the rise in calculated foreign ownership would be much more (i.e. 80%+) because Finansbank's market cap is now almost USD60bn (or twice the market cap of the rest of the banking sector). And this is roughly the same amount of the actual free float market cap of the whole equity market (ex Finansbank)."

"In other words," said Tuzun, "as I shall show below, foreign ownership has increased not because of Finansbank ,but due to actual foreign inflows. The next chart is based on the foreign ownership data of the six major banks (Akbank, Garanti Bank, Halkbank, Isbank, Vakifbank and Yapi Kredi Bank)."

He added: "This is the ‘true’ version of the foreign ownership in the listed banks space. Accordingly, the foreign institutional positioning in Turkish banks has increased back to its recent peaks. This is partly due to the increase in Akbank’s foreign ownership after the sale of a stake by a Sabanci family member. However, there has been a decent increase across the board in all the banks. As a result of this increase in foreign ownership, the banking index has seen a material rally in January. In fact, it is the best performer YTD in the EM space. Given that foreign institutional ownership has reached its recent highs, any further rally from here might run out of steam in the short term.”


So, to sum up, the official data sets are not reliable.

There are sharp outflows and inflows, allegedly from abroad, that can hardly be explained.

Not for the first time, there’s a small bank with a market cap something like twice the market cap of the rest of the banking sector "but foreign ownership does not increase because of those small banks but due to actual foreign inflows".

The owners of large cap banks sell their shares. And, “any further rally from here might run out of steam in the short term”.

On January 23, the central bank’s weekly data pointed to a fresh record high of $122bn in resident real persons’ FX deposits as of January 17.

“So local retail/corporate, and foreign institutional don't really buy the story... And yet Turkish markets hold in relatively well—heavy micro management now.  Recycling of FX deposits into credit—crushing credit rates lower, and giving an impression of lower risk perceptions—and back into the FX, to support the TRY [Turkish lira]. How long can this go on?”

Whether the law begets justice is not a foregone conclusion. On February 4, 2020, Polish President Andrzej Duda signed legislation that permits the opening of disciplinary action against judges who criticise reforms

Recriminations over lack of progress with country’s big Black Sea ambition will fly ahead of general election.

THE MITTELEUROPEAN VIEW: When the nuclear option fails – Von der Leyen’s rule of law instruments vs political realities
3 days ago
Torpedoed. Georgia’s government knocks out consortium contracted to build Anaklia deep sea port but flagship infrastructure should still be built
3 days ago
ALACO DISPATCHES: I say Moldovan, you say Romanian…
5 days ago
ING: Russian budget spending plays catch up in January
10 days ago
TRACE: A closer look at corruption risk in the western Balkans
17 days ago