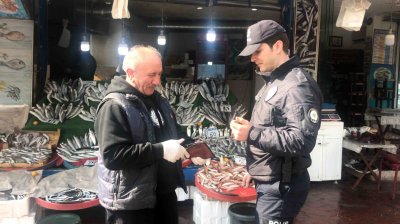 A Turkish police officer checks a senior citizen's ID card. There are almost one million Turks over 65 who find themselves having to work.
By Akin Nazli in Belgrade March 23, 2020

How big an economic hit will Turkey take from the coronavirus (COVID-19) pandemic? Rarely, if ever, can there have been so much divergence in the forecasting. But this is a phenomenon that has never played out like this among globalisation’s highly interconnected economies.

Capital Economics on March 23 cut its 2020 GDP growth forecast for Turkey to a contraction of 2%. That compares to the 4.3% growth it was anticipating a month ago. Its research note was entitled “Slashing our forecasts across the [Emerging Europe] region”, and looked at how Turkey is particularly vulnerable to the damage that will be caused to the tourism industry with so many countries introducing near total bans on commercial flights and holidaymakers cancelling their vacations in their droves.

“The proliferation of measures to curb the spread of the coronavirus as well as shifts in consumer behaviour will have a severe effect on retail, accommodation, recreation and transport sectors across the emerging world,” William Jackson of Capital Economics said on March 19 in a separate note.

Capital sees Turkey’s annual inflation coming in at 11.5% in 2020 and has pencilled in a further 100bp rate cut at the Turkish central bank’s next monetary policy committee (MPC) meeting to be held on April 20. It gave those predictions on March 20 in its Emerging Europe economics weekly issue entitled “Output set to collapse, policy support likely to build”.

“To quote [Fed chairman] Jay Powell, much about the future remains ‘unknowable’,” Neil Shearing, chief economist of Capital Economics, added on March 23 in a research note entitled “What clients are asking about the corona crisis”.

March 23 also saw IMF managing director Kristalina Georgieva take part in a call with G20 finance ministers on the coronavirus emergency. After the discussion, she said in a statement: “The outlook for global growth: for 2020 it is negative—a recession at least as bad as during the global financial crisis or worse… Investors have already removed US$83 billion from emerging markets since the beginning of the crisis, the largest capital outflow ever recorded… nearly 80 countries are requesting our help… We stand ready to deploy all our US$1 trillion lending capacity.”

The Institute of International Finance (IIF) has also cut its 2020 GDP growth forecast for Turkey. Its estimate of a slightly positive 0.6% compares to the 2.2% it was predicting last October. The latest figure was given in a March 23 research note entitled “Global Recession”.

Those looking to identify the scale of the trouble ahead for the Turkish economy will also note that the IIF has cut its Euro area 2020 growth forecast to minus 4.7%. Europe buys around half of Turkey’s exports.

Relative to the reserve buffers, financing needs are especially high in Turkey and South Africa, the IIF added on March 17 in a note entitled “The COVID-19 Shock To EM Flows”.

“Economist… who lives here on Earth”

No-nonsense analyst Julian Rimmer at Investec sent a March 20 note to investors with the following observation: “Turkish Fin Min … Berat Albayrak sees no economic impact of the coronavirus on the Turkish economy and went further: ‘January and February went very well. There has been a slight decline in March, but we will end the first quarter with growth above expectations. We don’t have concerns regarding our targets. We will achieve a 5% growth in 2020, and inflation will follow a downward trend due to recent global developments.’ Meanwhile an economist at JPM, who lives here on Earth rather than just dropping in from outer space like Albayrak, speculated Turkey will be impacted worse than any other EM and predicts a sequential fall of 17% in 2Q GDP. That's some divergence.”

He added: “Turkey is still very much in a state of denial about how widespread the virus is and they would appear to be several weeks behind the rest of Europe not in terms of infection but in terms of acknowledging it. After having no cases till March  10th, they are now shooting up to 400 with four dead [Editor’s note: by the end of March 23 the official figures were 1,529 infections, with 37 deaths]. I doubt Turkey's health system and its govt offices are not competent to deal with this, especially when the two most public faces of the AKP [ruling party] occupy not just another planet but another galaxy.

“I don't know how many stimulus packages can be administered to a parrot which is clearly a dead parrot, ex parrot, pushing up daisies, joined the choir invisible parrot. That Magic Carpet under which the govt sweeps everything might now give the appearance of floating because of the methane gas generated by so much $%hit underneath it.”

While, the Turkish government comes under fire for blithely persisting with its line that it can still achieve its official 5% GDP growth target for 2020 and not head to the IMF, research by Ipsos quoted on March 23 by daily Sozcu showed 93% of Turks anticipate that the virus crisis will hit the country’s economy, while 74% thought it would impact their family budget.

‘Nothing for regular people’

Meanwhile, there are intensifying reactions to the economic support package announced last week by President Recep Tayyip Erdogan. The package has been knocked for including absolutely nothing for regular people already in dire straits caused by Turkey’s currency crisis.

“Unemployment and inflation are already serious problems in Turkey. It is the most vulnerable blue-collar workers, whose incomes are going to be at risk, who will probably suffer the first economic losses of this pandemic,” Guven Sak wrote on March 13 in a column entitled “Just how bad is COVID-19 for Turkey's economy?” for Hurriyet Daily News.

Around 36,000 Turkish automotive workers have been placed on leave, according to the daily.

With pandemic restrictions now meaning Turkish Airlines can only fly to a handful of destinations, 85% of the carrier’s passenger planes have been grounded, the flagship’s chairman Ilker Ayci said on March 22.

Sales of stores on Turkey’s high streets and shopping malls dropped 70% in a week, Sinan Oncel, head of the United Brands Association, said on March 19.

The country’s shopping malls have been shut down.

The coronavirus is spreading at a frightening rate in Turkey and there remains a big question mark as to whether Turkish doctors, daily fighting a tremendous battle while lacking the requisite medical equipment to protect their own health, can push it back after the government played the grasshopper until the outbreak reached an undeniable level.