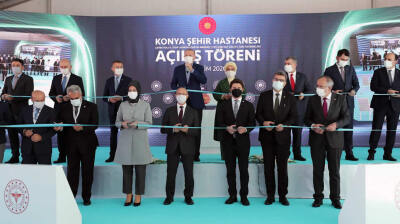 The inauguration ceremony for Konya City Hospital.
By Akin Nazli in Belgrade October 14, 2020

A consortium consisting of Turkish groups Gama and Turkerler and the US’ General Electric has launched talks with banks in Turkey to restructure €900mn of loans, two unnamed people familiar with the matter, who asked not to be identified as negotiations are private, told Bloomberg on October 14.

The consortium obtained the loans in question to build hospitals. They comprise of 18-year €301mn and $250mn outstanding loans for Bayrakli hospital in Izmir and a €314mn loan for Kocaeli hospital.

Both hospitals have a total investment value of nearly €1.2bn, according to Gama Holding’s website.

The Turkish government has been building 17 hospitals since 2015 for $10bn under a public-private-partnership (PPP) model.

Under the model, critics have noted, Turkish President Recep Tayyip Erdogan-affiliated businessmen build and operate hospitals while the government pays them euro-indexed annual fees over 25 years and provides loan guarantees.

Annual payments are higher than the overall construction costs of the hospitals while the facilities are often viewed as too large and impractical for effective medical operations. As part of the programme to deliver new hospitals, in-city hospitals are scrapped, adding to the economic cost of the new hospitals, seen as “black holes” by their opponents.

Lenders to the Gama-Turkerler-General Electric consortium include the European Bank for Reconstruction and Development (EBRD), US Overseas Private Investment, ICBC London, Intesa Sanpaolo and UniCredit, according to data compiled by Bloomberg.

“Elephant in the room”

Turkey is the country where the EBRD has its single largest investment portfolio, of which 97% is in the private sector. On October 12, Roger Kelly, EBRD’s Istanbul-based lead regional economist, said in an interview with Bloomberg that Turkey’s non-performing loan (NPL) “issue is an elephant in the room”. A boom in credit extension increases the risk of taking on riskier customers, and means many of the loans are still relatively young, he said.

To cope with an expected increase in souring credit, the EBRD has proposed that an asset-management company is created to carve out bad loans in Turkey. The London-based lender, which has vowed to boost loans denominated in Turkish lira (TRY) and has provided support of more than $13bn in the country over the past decade, has said it would be willing to invest in a vehicle that would bolster the asset quality of banks.

The European Union owns part of the G7 economic powers-controlled EBRD’s capital and co-finances investments with it. It has warned Turkey that it could impose sanctions on Ankara if “provocations and pressures” continue in the East Mediterranean. But on October 8, the EBRD’s outgoing acting president Juergen Rigterink told Reuters that the bank was going ahead with providing a medical emergency loan to Turkey. “We are currently looking at helping Turkey with an emergency loan on the medical side, it will be one of our first projects on the sovereign side,” said Rigterink, adding that the project was “not under review”.

Asked about the development bank’s involvement in Belarus—where the Lukashenko régime is attempting to suppress a people’s uprising—Rigterink said the lender was monitoring developments closely and consulting with shareholders. “We have only invested in the private sector in Belarus and expect that to be case in the future,” he said.

The Turkish health ministry, which has kept up on-time payments to the Erdogan-affiliated hospital contractors despite the pandemic strains on finances, has defaulted on $2.3bn debts owed to American and other pharmaceutical companies and on another Turkish lira (TRY) 19bn of debts owed to local medical equipment suppliers.

Erdogan has so far resisted the sale of NPLs to foreigners, which would mean a full-blown looting of hypothecated assets held by the businessmen affiated with him. Erdogan may rather prefer debt restructurings to delay the inevitable doom is one line taken by sceptics on the markets in Istanbul.

Restructurings were first launched with the state’s Credit Guarantee Fund (KGF) following the failed coup attempt in July 2016, while Dogus Holding, owned by the formerly secular but presently Erdoganist Sahenk family, and Yildiz Holding, owned by the Islamist Ulker family who recently had problems with Erdogan due to the transferring of their wealth abroad, initiated the first round of high-volume debt restructurings at the beginning of 2018, prior to the lira meltdown that came in August.

Prior to the coronavirus crisis, in February, the duo relaunched a second round of high-volume debt restructurings on already restructured loans to benefit from synthetically pressured interest rates.

All of these groups or businessmen in question are billionaires, who mainly boosted their wealth during the Erdogan era, and their ongoing debt restructurings are typical examples of moral hazard.

Ferit Sahenk, head of Dogus, has depleted his stakes in Garanti Bank to Spain’s banking group BBVA for billions of dollars with perfect timing but he has not paid his debts to banks, including Garanti, as yet.

Turkey’s largest restructuring deal worth of $6.5bn was struck in 2018 by Yildiz Holding, which has spent billions of dollars on buying leading confectionery makers in the US and Europe.

Earlier this month, unnamed people “familiar with the matter” told Bloomberg that Dogus was in talks with lenders to delay repayments on €2.3bn of debt that was restructured in April 2019.

On September 29, two unnamed people told Reuters that another consortium, which also includes Turkerler along with Italy’s troubled contractor Astaldi, signed a €1.1bn restructuring deal for the stalled Etlik mega hospital in Ankara. The EBRD, which has invested a total of €650mn in building city hospitals in Turkey, was also present in this deal.

“Restructuring negotiations are continuing for other PPPs that are in trouble,” one of the unnamed people told Reuters.

On September 15, some unnamed people told Reuters that large and small companies have been looking for further revisions to nearly all of the restructurings agreed in the past two years.

Akbank is controlled by Sabanci.

Following the coronavirus crisis, Turkey’s tourism industry, which was already hit by the crisis in relations with Russia and security troubles in 2015-2016, will be joining the construction and energy industries in the world of debt troubles.

The government has provided some relief to the construction industry with subsidised mortgage loans in recent months and to the energy industry in hiking electricity prices for consumers and cutting the sale prices of the government-run electricity producer EUAS.

In June, S&P Global Ratings warned that it saw problematic loans at Turkish banks growing to a share of more than 20% by 2021.

Also in June, Hema Group agreed a refinancing agreement on a €400mn loan.

ISTANBUL BLOG: Turkey's virus disaster. Where does one start?

ISTANBUL BLOG: Turkey's virus disaster. Where does one start?
BEYOND THE BOSPORUS: A peek under the lid at Turkey’s obscured problem loan burden
Turkey’s private airlines seek state help to restructure 20bn lira of loans

Russian retail investors are finally investing in stocks as they look for better returns following the steady fall of interest rates at banks in recent years. But the CBR is worried that risks for the financial sector are rising as a result.

Ukraine got off to a very good start this year and by summer had grasped the nettle of most of its major problems. But in the autumn it all fell to pieces. With $14.5bn of debt redemptions in 2021 it is not clear how it will cope.

Russian retail investors piling into the stock market for the first time, but CBR worried about rising risks
16 hours ago
Turkmenistan: The dammed united
2 days ago
Israel out to provoke war in dying days of Trump says Khamenei’s adviser after assassination of Iran’s nuclear mastermind
2 days ago
Ukraine debt: muddling through for a bit longer but 2021 will be tough
3 days ago
Moldova’s presidential election is over, now the battle for the parliament begins
5 days ago