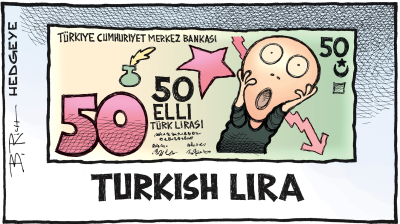 August 13 proved to be another day during which the Turkish lira lurched towards the record low set at the end of last week as market players looked out for any telling market signs that could deliver the straw that breaks the camel's back.

Reuters reported that Turkish banks have started charging fees on FX cash withdrawals since the central bank permitted such commissions just over a week ago, Reuters.

Government-run Ziraat Bank charges a 0.03% commission for such withdrawals above $3,000 while private lender Garanti BBVA now requires a 0.015% fee for those above $20,000.

Banks’ physical FX costs have risen due to shrinking tourism receipts and contracted border trade amid the coronavirus (COVID-19) crisis, with lenders having to apply to the central bank at home or foreign banks such as Bank of America and Credit Suisse to meet their foreign exchange cash needs, high-ranking bankers told the publication.

Turkish banks have to pay $1 to obtain $0.9985 in cash from the central bank (BloombergHT).

Portfolio outflows also continued, with a net $708mn finding the exit in the week ending August 7.

Turks pay a 1% Tobin Tax when they buy FX or gold via the banking system, while they also face a one-day settlement delay on individual purchases of more than $100,000 in FX.

When securities of company debt with a spread above 800bp spread are added, the figure rises to $5.3bn, Bloomberg noted.

On August 4, Moody’s Investors Service said that it has affirmed Lebanon-based the long-term deposit ratings of Bank Audi’s Turkish unit, Odeabank, at Caa1 with a negative outlook.

The affirmation followed the withdrawal of the ratings of Bank Audi, which controls a 76% stake in Odea.

“Which countries are most exposed to a Turkey crisis? Main channel for neg. spillovers is the financial sector. Spain (read: BBVA) is clearly #1, while France (read: BNP Paribas) is #2. This is also why the $EUR is vulnerable to a Turkey crisis (although less than in 2018),” Morten Lund of Nordea Markets wrote on August 10 in a tweet (chart below).

“Turkey PMI.... looks a “V”.... in line with our BigData (leading) but still needed to be confirmed by Hard Data (lagging). Watch out with the virus,” Alvaro Ortiz of BBVA Research tweeted on August 4.

On August 12, Turkish President Recep Tayyip Erdogan’s son-in-law and finance minister Berat Albayrak was live on TV. He talked total nonsense as always. He makes Turks fret when he talks as if he is jeering at the idea of there being a crisis when there is actually a crisis.

On August 13, father-in-law Erdogan was live on TV. The president has, as usual, his own agenda. He wants his oil and gunboat adventures in the Mediterranean and the Hagia Sophia mosque defiance to be talked about.

The so-called Fethullahist Terrorist Organization (FETO), the main opposition Republican People’s Party (CHP), some historical figures such as the late PM Adnan Menderes and the late president Turgut Ozal were present in Erdogan’s speech, which he read via a teleprompter.

He also mentioned some tunnels, “speed” trains, the targeting of Turkey with non-stop terrorist attacks, the failed coup attempt of July 15, 2016…

And he said he would talk to Angela Merkel.

As jitters over the renewed descent of the lira turning into a full-on economic crisis continued to unsettle the nation, a curious announcement arrived on August 11 from the interior ministry.

The PKK, aka the Kurdistan Workers’ Party, may exchange FX in big amounts to meet its financing needs for its winter settlement, the ministry said in a circular sent to governorships in Turkey’s Kurdish-populated southeastern provinces.

Turkey has seen countless absurdities in its four-decade long war with the separatist PKK. However, the interior ministry’s statement on the PKK’s FX exchange outlook at a time of an ailing lira was a first and it could not be ascribed any meaning.

Meanwhile, the implicit rate hikes continue. As of August 12, the central bank’s weighted average cost of funding reached 8.71% versus its policy rate of 8.25%.

On August 13, the central bank opened a one-month repo auction and the costs were at above 10%.

Deposit and lending rates along with the government’s domestic borrowing costs are also on rise.

“The Turkish lira remains volatile while fx mkts try to work out precisely what kind of tightening of liquidity the CBT has in mind. It is not communicating its strategy,” Julian Rimmer of Investec wrote on August 12 in a note to investors.

The central bank also opened a three-month auction to swap 20 tonnes of gold from local lenders for lira, according to Bloomberg.

The government has been tapping gold and FX from local banks as it will never need to repay.

On August 11, the government tapped an additional $3bn from local lenders in domestic bonds that pay a 1.75% semi-annual coupon.

As of August 7, the net FX deficit of Turkey’s state banks reached $12.2bn, while the central bank is still shorting dollar contracts on the Borsa Istanbul derivatives market (VIOP).

TURKEY INSIGHT: Moody’s warns of autumn peril
14 hours ago
MITTELEUROPEAN INSIGHTS: Better $1.5bn from Russia or €1bn from the EU in the hand than $15-20bn in the bush?
15 hours ago
COMMENT: Ukraine’s the Old Rotten System is alive and well
5 days ago
STOLYPIN: Whatever is happening to Putin?
8 days ago
FPRI BMB Ukraine: Lawmakers’ promises, one year later
12 days ago