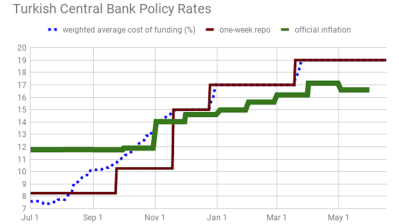 The prevailing belief on the markets remains that if Turkey’s autocratic leader Recep Tayyip Erdogan demands an interest rate cut then the monetary officials immediately do his bidding, but if that’s the case the president-cum-central bank governor has clearly not yet snapped his fingers as the national lender on June 17 announced that it was leaving its policy rate at 19.00%.

Attempting to assess the lie of the land following the rate freeze, William Jackson, chief emerging markets economist at Capital Economics, concluded in a note to investors: “Our sense is that the [central bank] governor will try to thread the needle by starting an easing cycle in July (barring a sharp fall in the lira), which would appease Mr. Erdogan, but keep the one-week repo rate above inflation, so that he can stick to the line that monetary conditions remain ‘tight’ and attempt to keep investors on board. Overall, we expect 500bp of cuts in the one-week repo rate (to 14.0%) by the end of this year.”

Either way, the Turkish lira (TRY) had a bad day, ending 1.2% weaker at 8.71 to the dollar—not far off its recent all-time low of 8.79—but while it’s true there is little in Turkey’s economic fundamentals that should have given the beleaguered currency a better day, its fall was perhaps more due to the USD jumping following a hawkish statement from the Fed projecting an accelerated timetable for US rate increases and an end to emergency bond buying sooner than expected.

Jackson also observed: “The decision itself wasn’t in doubt. We and all the other analysts polled by Refinitiv correctly anticipated the outcome. So far, new governor Sahap Kavcioglu has played a much more cautious game than we and most others had anticipated. He kept interest rates unchanged at the first two MPC [monetary policy committee] meetings under his watch, despite seemingly being appointed by President Erdogan to lower interest rates. And in recent meetings with investors, he pushed back against the idea that the start of an easing cycle was imminent.

“Today’s MPC decision was no different. The accompanying statement reiterated the line that a tight monetary policy stance would be maintained ‘decisively’ until there is a significant fall in inflation. By that, they mean an inflation path along the lines of that in the central bank’s latest Inflation Report, in which the headline rate falls to 7.5% by the end of 2022 and 5.0% by the end of 2023 (from 16.6% y/y in May).

“That said, the door is still open for an easing cycle to start. The central bank only committed to maintaining the policy rate (19.0%) above inflation (16.6%), suggesting that the MPC may already see some leeway to lower interest rates while maintaining what they consider to be a “tight” stance.”

Turkey’s central bank appears to have grown in confidence that Turkey’s current account balance will improve, which may provide more scope for easing. Securing that improvement will partly hinge on whether Ankara can convince sources of millions of holidaymakers who traditionally flock to Turkey—Russia, Germany and the UK being three big ones—that it has overcome its coronavirus outbreak to the point that tourists can be advised to board the plane for its Meditteranean shores and other delights.

What kind of a mood they will find when they get there may be tough to predict. There are plenty of observers by now convinced Turkey’s economy is going over the precipice. Responding to the rate hold with a reminder that Turkey’s official inflation rate is seen by many as “phony”, Steve Hanke, an economist and senior fellow at Johns Hopkins University, wrote on Twitter: “Following the Turkish Central Bank's decision to maintain its benchmark interest rate at 19%, the lira plunged to a record low against the USD [sic]. By my measure, inflation is 32%/yr. So, real interest rates in Turkey are -13%. The lira is TOAST.”