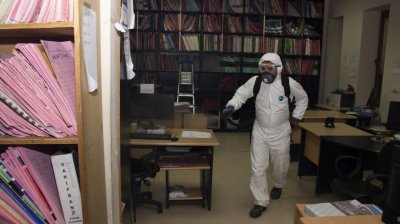 Disinfection work at a courthouse in Turkey.
By bne IntelIiNews March 17, 2020

Turkey has detained 19 people claimed to have posted “unfounded and provocative” social media  comments about the coronavirus (COVID-19) outbreak, with the interior ministry alleging that some of the remarks have targeted officials and generated panic and fear by implying that the pandemic has spread widely in the country in the face of an insufficient response from the state.

In all, 93 suspects have been identified, the ministry added.

“Nineteen of these suspects have been detained and the process of detaining others who have been identified is continuing,” said the statement, issued late March 16.

bne Intellinews has since March 4 been running reports questioning the veracity of Turkey’s reporting on the virus status in the country. It was only late on March 11 that the country officially registered its first case, making it the last major economy to do so. Given that Turkey neighbours Iran—which like Turkey has a population of around 82mn and is enduring the world’s third biggest COVID-19 outbreak—the picture painted by Turkish officials has not seemed feasible. A US surgeon on March 10 raised searching questions as to the reliability of the officially-decreed testing kits and process Turkey is using.

The number of coronavirus diagnoses in a Turkish metropolis has exploded, Turkish Medical Association (TTB) chairman Sinan Adiyaman told local TV channel Tele 1 on March 16, without naming the city. The positive results that were coming through were not related to infections picked up in foreign countries but were an internal matter, he added.

“We are hearing from doctors all around the country that the number of cases is much higher than 18 [Turkey had reported 18 cases by the weekend, but by late on March 17, the official count was 47]... The picture emerging in the last few days suggests that the epidemic could reach serious levels... We call on the health ministry to govern this crisis together [with us]…We need to act in coordination,” Adiyaman said during a separate press conference during the day.

Since it announced its first officially recorded COVID-19 infection, to contain the spread of the virus Turkey has closed its schools, along with cafes, entertainment and sports venues, while also suspending mass prayers in mosques and extending a flight ban to 20 countries.

Reuters reported that the Istanbul governor’s office said on March 17 that Turkish citizens who request to return from nine European countries would be brought back by midnight on March 17 on condition that they are quarantined for 14 days.