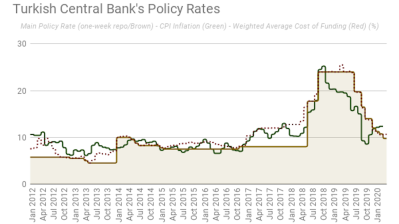 Turkey's central bank on March 17 called a surprise sitting of its money policy committee and lowered its key interest rate by 100bp to 9.75%, while announcing other measures to deliver cheaper liquidity to companies hurt by the additional economic ills caused by the coronavirus (COVID-19) crisis.

The Turkish lira (TRY) went on a rollercoaster ride, at one point getting within a hair’s breadth of 6.50 to the dollar, but then—as global markets steadied on news of governments around the world introducing fiscal measures including “helicopter money” to fight damage wrought by the coronavirus pandemic, and the Turkish and other central banks announced additional policy support—recovered to 6.40 by the end of the day, stronger by 0.4% d/d. It has weakened by around 8.5% to date this year, following its 36% decline across 2018 and 2019. The TRY is weaker now than at any other time since the 2018 lira crisis.

The central bank’s rate-setters were scheduled to next meet on March 19, but with markets in turmoil they were called on to assemble two days earlier in an emergency move. The March 19 meeting will still go ahead and Capital Economics has predicted it will produce a further 100bp rate cut.

Adjusted for inflation, following the percentage point cut, Turkey’s benchmark rate stands at 2.65%, near the world’s lowest. Consumer prices officially rose 12.4% y/y in February. Since July last year—in a fast streak of aggressive easing called for by Turkish President Recep Tayyip Erdogan who is trying to secure a rapid credit-fuelled bounceback for the economy that was ailed by a 2019 recession—the key rate has been chopped from 24%.

The cut—the seventh straight cut brought in by the rate-setters—follows a crash in oil prices. Turkey is a big energy importer, thus the shock slump in the price of a barrel of oil is beneficial to a country addressing inflation and current account woes.

The central bank also unveiled a series of measures aimed at containing the economic fallout, easing lenders’ access to lira and foreign-currency liquidity. The policy makers have cut the amount of foreign exchange lenders must deposit with the national leder. That effectively injects $5.1bn worth of hard currency and gold into markets.

In another move, the central bank delayed $7.6bn of foreign exchange debt repayments by exporters by another three months. That should reduce the short-term need for dollars in the domestic market.

The central bank also urged banks to extend credit to companies that find themselves in financial trouble amid the COVID-19 difficulties. It said it would provide TRY at 8.25%—1.5pp lower than the benchmark rate—via a three-month repo facility to banks that meet lending “targets.”

Policy makers will extend as much liquidity as banks require through intraday and overnight standing facilities and may inject funds into the market through repo auctions with maturities of up to 91 days when needed, the central bank said.

“Stronger than” a rate cut

The measures announced after the rate decision are “stronger than” a cut in borrowing costs, Haluk Burumcekci, founder of Istanbul-based independent research firm Burumcekci Research and Consulting, told Bloomberg.

The steps show the central bank will secure a robust funding facility to the banking system to ensure credit continues to flow to the real sector, he added, saying. “This will help alleviate the recent tightening in financial conditions and limit the potential slowdown in economic growth.”

In a note to investors, Jason Tuvey, senior emerging markets economist at Capital Economics, said that the scope for further monetary support beyond the further 100bp cut he sees the central bank bringing in on March 19 would likely be limited by weakness in the lira.

Tuvey said: “Turkish policymakers have pushed aside concerns about the rise in inflation in recent months and, for now, recent falls in the lira… Turkey’s poor external position means that deeper interest rate cuts are likely to put the lira—which has fallen by almost 4% against the dollar so far this month—under even more pressure. And ultimately the easing cycle that started in the middle of last year is nearing an end. If inflation continues to rise and the lira sell-off intensifies, rate hikes might eventually come on to the agenda.”