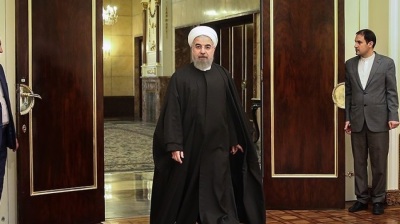 “If you want to try someone, try me,” said Iranian President Hassan Rouhani on January 27 as he hit out at Iran’s hardline judiciary over the prosecution of the country’s telecommunications minister for an alleged refusal to block Instagram and impose restrictions on other foreign social media and messaging platforms.

Mohammad Javad Azari Jahromi was summoned for prosecution last week. Rouhani, a centrist and pragmatic politician, spoke out against that move at a cabinet meeting, saying that an effort to improve internet bandwidth in Iran was under way because of his orders, partly to help improve business and assist an anti-corruption campaign. Both a “lack of control on content” as well as the “closure” of social media were wrong, he added.

“These days, the internet is like oxygen for people... to want to restrict it would be absolutely wrong.... How else can we expect people to do everything from home and teach their children online during the [coronavirus] pandemic?” Rouhani asked.

Jahromi has been released on bail. His prosecution is seen as part of a political struggle between the more reform-minded politicians and conservative hardliners in Iran ahead of the presidential election in June. Rouhani will not run in that poll, as he will have completed two terms as president. A third consecutive term is not possible by law.

He was ordered to return the funds and fined four times the amount in question, Esmaili said.

Jahangiri was on the board of the Tehran Chamber of Commerce and is also the founder of the private Gardeshgari Bank.

Fereidoun has denied any wrongdoing. He has accused hardliners of trying to discredit him by obtaining evidence through "illegally intercepting communications of the office of the president".