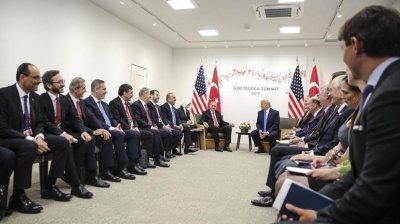 Turkish President Erdogan and his US counterpart have had several high-profile meetings since the Trump administration came to power in 2017, including this one at 2019's G20 Osaka Summit.
By bne IntelIiNews May 29, 2020

Mehmet Ali Yalcindag, chairman of Turkey’s oldest state-sponsored trade group, the Turkey-US Business Council, who partnered with Donald Trump and his daughter Ivanka Trump on the Trump Towers Istanbul deal, addressed letters to the cabinet members, copied to the US president, Courthouse News Service reported on May 28. 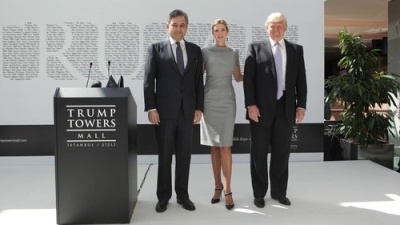 “Well before [the] Covid-19 [pandemic] and the new set of economic and partnership needs created by this crisis, President Trump and [Turkish] President [Recep Tayyip] Erdogan spoke in November 2019 of expanding annual trade between our countries to $100 billion dollars,” Yalcindag wrote to US Secretary of Agriculture Sonny Perdue on May 20. “Dramatically increased agriculture exports from the US to Turkey would be a major step to delivering this.

“I have copied this letter to President Trump,” Yalcindag’s letter concludes.

Yalcindag, who was appointed by Erdogan to head the Turkey-US Business Council, sent similar letters to Energy Secretary Dan Brouillette and Commerce Secretary Wilbur Ross. They were both “distinguished guests” at a lavish US-Turkey Conference that the foreign business group hosted at Trump International Hotel in Washington last year.

The letter to Brouillette focused on his vision of liquefied natural gas (LNG) potential. Only this week, it emerged that US LNG supplies in March played a big factor—to Russia and Iran’s detriment—in delivering gas volumes that for the first time meant that Turkey in a single month imported more LNG than natural gas via pipelines.

“Several long-term contracts for gas supply to Turkey are due to expire within the next two years,” the letter to Brouillette states. “This means there is a clear supply and demand match—if we can align partners on both sides.”

All three letters were publicly disclosed after the Turkish business group’s lobbyist, the White House-connected Mercury Public Relations, filed the documents with the US Justice Department pursuant to the Foreign Agents Registration Act. One of Mercury’s lobbyists Adam Lanza served as Trump’s communications director on the presidential transition team.

Jordan Libowitz, a spokesman for the anti-corruption watchdog Citizens for Responsibility and Ethics in Washington (CREW), said in a phone interview with Courthouse News Service that the letters appeared to show a pattern of foreign governments using business relationships to try to influence the Trump White House.

“It looks like they’re trying every trick they’ve got in the book to influence the US government, and that includes their ties to the president,” Libowitz said.

Trump and daughter Ivanka were private citizens when they appeared with Yalcindag at the ribbon-cutting for Trump Towers Istanbul in 2012. After Trump won the November 2016 presidential election, the president-elect was said to have described the Turkish businessman as a “close friend” in a phone call with Erdogan.

It is Yalcindag’s father-in-law and founder of the Dogan Holding conglomerate, Aydin Dogan, who owns Trump Towers Istanbul, comprised of two 40-storey buildings, one of which is residential, with the other an office complex.

Yalcindag, who in 2016 came under fire in Turkey after hackers exposed his apparent attempts to reduce negative coverage of the Erdogan regime in Dogan Holding newspapers, attended Trump’s inauguration and became part of a trio of US and Turkish power brokers through marriage. The New York Times described Yalcindag as a go-between for fellow sons-in-law: Turkish Finance Minister Berat Albayrak, who married Erdogan’s daughter, and Jared Kushner, the real estate investor, senior advisor to Trump and head of the White House Coronavirus Task Force, who is married to Ivanka.

Courthouse News Service also reported how Turkish lobbying expenditures in the US have ballooned during the Trump presidency.

Last year, an investigation by the publication studied the US Justice Department’s foreign lobbying database to identify the five largest recipients of money linked to the Turkish government between 2014 and 2018: Amsterdam & Partners, Ballard Partners, Gephardt Group, Greenberg Traurig, and Mercury Public Affairs. It found that their budgets, along with those of their subcontractors, more than quadrupled collectively, from more than $1.7mn in 2014 to more than $7.3mn in 2018.

Among investigations opened by Senate Democrats into Trump’s ties to Turkey, one probes the president’s financial relationship with Trump Towers Istanbul and another is examining his administration’s possible interference with a case involving Turkey’s state-run Halkbank. The lender has been charged with involvement in a money-laundering scheme centred on evading US sanctions imposed on Iran.

Week before crucial vote, no way of telling who will be Poland’s next president
23 hours ago
Preliminary results show clear victory for HDZ in Croatian general election
1 day ago
NBU lionises Smolii, clarifies cancellation of Eurobond decision
2 days ago
Serbia declares state of emergency in Belgrade as coronavirus cases spike
2 days ago
No protests, but police continue to randomly arrest pedestrians on Belarus Independence Day
2 days ago