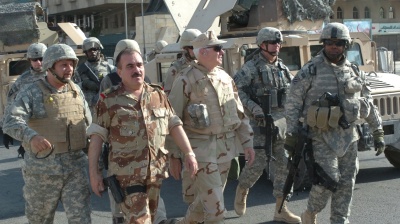 Some analysts feel Trump's move unnecessarily places US troops in the Middle East in more danger. Pictured are US Centcom officers and soldiers accompanying Iraqi police commanders on a walking tour of Mosul, Iraq.
By bne IntelliNews April 8, 2019

US President Donald Trump on April 8 designated Iran's Islamic Revolutionary Guard Corps (IRGC) as a foreign terrorist organisation (FTO). Never before has Washington labelled another nation's military in such a way.

Iran’s national security council immediately retaliated by declaring US Central Command (Centcom) a terrorist organisation after Foreign Minister Javad Zarif wrote to President Hassan Rouhani urging such a response, Iranian media outlets reported. Centcom is the Pentagon wing that oversees Washington's security interests across the central area of the world map, most notably in Afghanistan, Iraq, Iran, Pakistan and Syria. The security council said in a statement: “The IRGC unlike America and its regional allies who have always supported extremist and terrorist groups in West Asia region, have always been in the frontline of fighting terrorism and extremism in the region.”

As bne IntelliNews’ Tehran Blog reported on the eve of the FTO designation announcement, analysts have questioned whether the White House uber-hawks are looking to establish a basis for a military conflict with Iran by taking such a tough approach to Iran’s most powerful security organisation. Some Pentagon officials, including Joint Chiefs of Staff chairman Gen. Joe Dunford, have expressed concerns that the aggressive stance taken towards the IRGC might place in question US troop safety in the Middle East, according to the Wall Street Journal. The BBC said that the Central Intelligence Agency has also reportedly opposed the move.

‘Pre-election gift to Netanyahu’
Some analysts, meanwhile, see the designation as a pre-election gift to Israeli Prime Minister Benjamin Netanyahu who this week faces a tough battle to get re-elected and may turn to a coalition with far right parties to stay in power. They also note that Trump’s decision was largely symbolic because the IRGC and Iran already are already subject to stiff US sanctions. On Twitter, Zarif called the FTO move “A(nother) misguided election-eve gift” to Netanyahu.

Iran’s state-run TV said the designation was not permitted by international law. “No other country has the legal right to designate as terrorist another country’s armed forces ... Iran’s influence in the Middle East and its success in fighting against Islamic State are reasons behind this designation,” the broadcaster said. Iran’s forces and the militias they back are widely seen by experts as having done far more to destroy Islamic State in Iraq than the US did.

In an April 8 statement, Trump said: "This unprecedented step, led by the Department of State, recognises the reality that Iran is not only a State Sponsor of Terrorism, but that the IRGC actively participates in, finances, and promotes terrorism as a tool of statecraft."

He added that the move was meant to "significantly expand the scope and scale" of pressure on Iran. Under its fierce sanctions regime aimed at Tehran, the Trump administration is attempting to strangle the Iranian economy. Officially, the objective is to drive Tehran to the negotiating table to reshape Iran’s Middle East policies and activities—including as regards Syria, Iraq, Yemen and Israel—but some observers believe Trump’s hardliners are pursuing regime change.

"If you are doing business with the IRGC, you will be bankrolling terrorism," Trump added. The IRGC is behind so many businesses in Iran that it is responsible for a huge amount of the country’s GDP, with some unconfirmed estimates saying the share is more than 50%.

A number of IRGC and affiliated entities have already been targeted by US sanctions for alleged proliferation activities, support for terrorism and human rights abuses.

US Secretary of State Mike Pompeo tweeted: “In an important step to counter the Iranian regime’s terrorism, the U.S. has designated the Islamic Revolutionary Guard Corps, incl. [foreign operations branch] Qods Force [or Quds Force], as a Foreign Terrorist Organization. We must help the people of Iran get back their freedom.”

Republican senator Lindsey Graham, a prominent Iran hawk, backed the FTO move. “The IRGC has been wreaking havoc throughout the Middle East and is a direct arm of the Ayatollah’s hateful policies,” he said, adding: “This announcement is another example of their commitment to reining in the destructive and murderous Iranian regime.”

‘Could have deadly consequences for US troops’
Jason Blazakis, a former US State Department official who previously oversaw the process for labelling FTOs, told Reuters he believed that the IRGC designation was done for purely symbolic and domestic political reasons that could have deadly consequences for US troops. He said it could prompt Qassem Soleimani, the powerful commander of the Quds Force, the IRGC’s elite foreign espionage and paramilitary contingent, to allow IRGC-controlled Shi’ite Muslim militias to retaliate against US forces in Iraq.

“I imagine that tight leash he [Soleimani] has had on them [Shi’ite militias] will be less tight. He could call for them to take actions against US assets in places like Baghdad’s Green Zone,” he reportedly said, referring to the Iraqi capital’s diplomatic and governmental enclave.

The only “theoretical benefit” the designation could provide is to make it slightly easier for the US Justice Department to prosecute people for providing “material support” to the IRGC, he was also cited as saying. The department already has the authority for such prosecutions under an executive order signed by President George W. Bush after the September 11, 2001, attacks by al Qaeda.

The Iranian rial (IRR) weakened on April 8. The dollar stood at IRR143,500 by the close of trading on the free market compared to the April 7 rate of 138,000, , according to the website bonbast.com. The rial has lost around three quarters of its value against the dollar since Trump early last year switched to a fresh sanctions attack on Iran.