To hike or not to hike? CBR faces tough choice this month 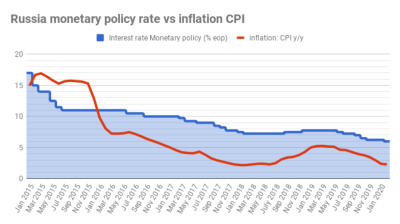 Inflation is expected to rise this year following the devaluation of the ruble in the last weeks, but economic growth is also anticipated to stall. What should the Bank of Russia do to deal with these conflicting changes?
By Ben Aris in Berlin March 16, 2020

It is not an easy decision. There are strong arguments for both options.

Russia started the year with an official growth forecast of 1.7% GDP expansion this year. But the double whammy after the OPEC+ production cut deal collapsed on March 6 that sent the value of oil down some $15 to $32 has obviously done a lot of damage.

That came on top of the growing fears from the coronavirus pandemic, which has now reached a point where supply chains are being disrupted and reducing activity. If China can be taken as a guide, then its PMI producers index collapsed in March to a record low of 38 – the lowest on record – and a similar thing is anticipated to happen to Russia’s March PMI index when the numbers come out at the end of this month.

And the stalling of economic activity comes on top of the fact that millions of people are simply staying home and not spending any money. At the end of last year real incomes rose for the first time in almost six years and consumption returned as an economic driver. That bonus effect has certainly reversed by now, which will also drag down economic growth.

As bne IntelliNews has reported earlier this month when we crunched the numbers, the Russian economy is far more robust than it was in 2014, the time of the last oil shock, plus it has massive reserves in the form of $150bn in the National Welfare Fund (NWF) that would allow the country to operate as normal for years, even with oil prices at $30.

But what is so perfidious about this crisis is that it attacks both the supply and the demand side of the equation. The fall of the oil prices and its related reduction in revenue means the supply side will be stymied. On the other side of the equation the fall in spending means demand is also hit hard. It is a much over-used cliché, but this is a perfect storm.

The classic response for a central bank that wants to boost growth is to cut rates to make money cheaper and encourage companies and people to borrow and spend more.

The classic response for a central bank that wants to control inflation is to hike rates and encourage companies and people to keep their money on deposit in a bank and prevent them spending and so drive up prices.

Which one is more important to control?

Currently inflation has fallen back to its record post-Soviet low of 2.3%, which is way behind the CBR’s 4% target rate. However, Alexander Isakov, chief economist at VTB Capital, says that with the current levels of foreign exchange in circulation (a hedge against the devaluation of the ruble) inflation should rise to 4.8% this year, with peak inflation of 5.3% to be reached in February 2021.

The devaluation pressures that drive prices up typically take about six months to work their way through the system and so it is clear that prices in Russia are more than likely to rise over the next six months.

Against that, in 2015 following the last collapse in oil prices, the devaluation effect moved through the system faster than was predicted and faded away in the spring of that year. On top of this, the Russian economy is less leveraged than it was six years ago. And the budget rule has meant that the value of the ruble is a lot less dependent on the price of oil than it used to be.

“While the CBR’s Board will obviously be concerned with volatile inflation expectations and the persistency of this higher inflation, we believe that, provided fiscal policy remains predictable, the spike will prove to be short-lived,” says Isakov.

The Russian CBR is widely admired and the staff are veteran crisis fighters. Isakov says it is instructive to look at the ECB decisions following the 2008 crisis. Then the ECB governor Jean­Claude Trichet decided to hike rates as the world went into meltdown following the US financial crisis that year.

“Actually, the ECB's case was seemingly clear cut: inflation was rising at 4.25% year on year, significantly above the central bank's target – and yet in hindsight the need for tighter policy was at least highly debatable,” says Isakov.

In normal times the central bank’s main job is to control inflation, but in crises the game changes and the central bank should also think about boosting growth – or at least acting to soften the blow from a big economic shock. That argues for keeping rates on hold, or cutting them.

Several countries in Central and Eastern Europe (CEE) have already cut rates and the US Federal Reserve bank also cut rates to next to zero last week in an effort to provide markets with some sort of pillow to land on.

Given that inflation remains low, even if it is expected to rise, and that clearly the shock to the Russian economy is going to be severe, Isakov believes that the CBR will at least keep rates on hold and may even return to cutting them in the second half of this year if the inflationary pressure works its way through the system quickly like it did in 2015.

“We thus believe that the CBR will pass the “Trichet Test” this Friday by: first, keeping the key rate on hold at 6.0%; second, revising inflation projections for this year to 4.5­-5.0%; [and] third, issuing neutral to dovish guidance, which would not exclude further easing this year, if inflation were to move in line with the projections and start to decelerate in 2­3 months,” said Isakov. “We still expect the key rate to decline to 5.5% by the end of this year, but expect the 2x25bp cuts to be delivered in 2H20.”