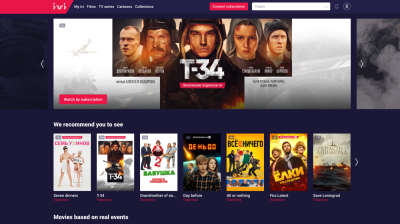 The "Russian Netflix" takes in $40mn of investment from Russian and foreign investors
By Adrien Henni in Moscow for East West Digital News September 20, 2019

A group of top Russian and foreign investors have injected $40mn into ivi.ru, Russia’s largest online video platform in terms of revenue. The transaction, which was announced in June, has just been completed, RBC reported last week, citing exchanges with the company and one of the investors involved.

“This investment will give an impetus to ivi’s development and will allow us to improve our content offering for our audience, in particular, by expanding the production of our own unique content,” ivi founder and CEO Oleg Tumanov told the media in June.

The terms of the deal have not been disclosed, but a source told the business daily that none of the existing shareholders exited the company.

Launched in 2010, ivi now occupies 42% of the legal Russian online video market. The company initially received $30mn from ru-Net (the previous name for RTP Global), Tiger Global Management and Frontier Ventures. In 2011, in a second round of funding, it received another $40mn from the same investors and Baring Vostok, the famous US-led private equity firm.

In 2015, ivi.ru secured $3.5mn from Buran Venture Capital. The same year, the service expanded its operations to 11 countries of the Soviet Union.

In the first half of 2019, Russian online video platforms saw their revenues grow to 10.6bn rubles (around $163mn, up 44.3% in rubles from the same period in 2018), according to Telecom Daily’s estimates cited by Vedomosti.

By the end of 2019, these platforms – including foreign ones: YouTube, iTunes, Google Play – are expected to earn about 21.5bn rubles ($336mn at the current exchange rate). Seven years ago, this market did not exceed 1bn rubles (see EWDN’s industry report).

ING: Russian balance of payments calls for caution over RUB