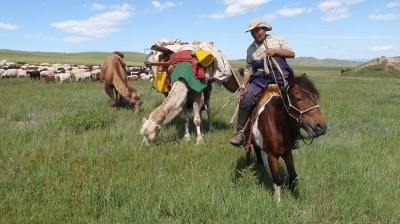 Bigger herds but fewer herding families has been the trend in Mongolia in recent decades. / Brücke-Osteuropa, wiki, public domain.
By Antonio Graceffo in Ulaanbaatar June 29, 2022

Pastoralism, also known as nomadic herding, was once practiced by the majority of Mongolians. However, more and more young people are leaving the steppes in search of education and a modern life as economic opportunities in the city increase. Herding still remains a big business though, as there will always be demand for meat, leather, wool, cashmere and milk. Consequently, over the past two decades, the trend has been toward fewer herder households with larger herds. Currently, Mongolia has more than three times as many animals as in the year 2000, while herding households account for only 20.5% of all households. 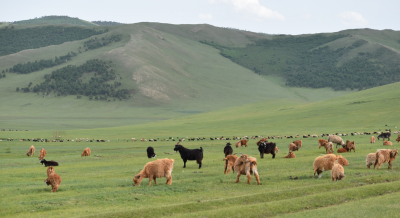 There are more than three times as many animals in Mongolia's herds now as there were in 2000 (Credit: Antonio Graceffo).

The herding life is physically demanding in Mongolia’s harsh climate where the winter is long, and temperatures can drop to -50 C. Caring for the animals is constant work. Herders are not on city power or sewage grids either. The gers, traditional tent houses, do not have showers or in-door plumbing.

The average annual income of a herding household, which is estimated at Mongolian tughrik (MNT) 15.6mn (around $5,000), is on par with the national average. However, herding incomes vary based on the number and types of animals a family keeps. Proximity to a city or population centre also plays a role in a family’s income. There are agents who travel out to the countryside to buy animals and animal products directly from herders. Obviously, these middlemen must be compensated, so a herder who has access to the markets directly could sell their animals for a higher price. Additionally, milk is difficult to transport over long distances and it spoils quickly. Herders who live far from a population centre may consume all of their milk themselves while those living closer to the city may sell it to earn an additional income. 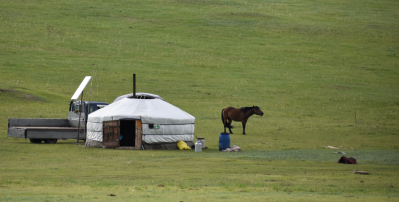 Herders who live far from big population centres lose some profit to middlemen agents who travel out into vast rural expanses to buy their animals (Credit: Antonio Graceffo).

Mongolia has five primary animals in its herding economy: horses, goats, camels, cows and sheep. Yaks are also often available. Although the milk, meat and hair of each can be used, some are more popular than others. For example, you cannot buy camel meat in a grocery store in Ulaanbaatar, but in the countryside, people may eat a camel. The same is true for the milk. All of the milk in the countryside will be used. But generally, only cow milk is sold in supermarkets, while horse milk is used to make the traditional Mongolian alcohol airag.

Sixty-three-year-old Otgonbayar S., a herder from Arkhangai aimag who has been herding livestock his whole life, said that he currently has 600 animals, but hopes to expand his herd to 1,000. He said: “Of course, most people now herd sheep, but people prefer big animals. They require a lot of care, but they are very profitable.” 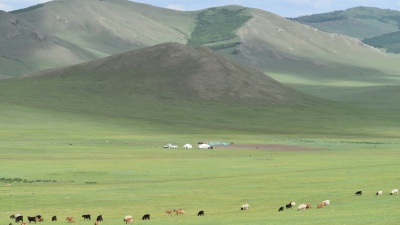 Sheep are profitable because of cashmere, but cows are still the most profitable animals to the herder because of the quantity of meat they yield (Credit: Antonio Graceffo).

Some herders will earn additional money by working for other herders shearing sheep of their wool or slaughtering them. Additionally, they may engage in handicrafts and sell products made of hide, bone or wool. Another source of income for some herding families is old-age pensions, which average MNT 548,400 ($175 USD) per month.

A small amount of extra cash can be earned from gathering berries, onions, black currant, and other forest products. However, families tend to save and consume these commodities rather than sell them.

The timing of income is dependent on weather, seasons and biological cycles of animals. Otgonbayar recounted: “In the spring, you hardly sell your livestock. You just love your animals and don’t want to sell those who just survived this bad cold winter. Well, in the spring, I earn 80,000 tughrik from goats.”

Goat cashmere is sold starting from March (in the east) to May (in the west) based on when the weather becomes warm because once the cashmere is removed, the goats can get cold.

Sheep’s wool is sold around the end of June when the wool becomes loose. The first camel wool is sold around spring, and the second in the autumn. Dairy products are sold starting from June to October or November depending on the year. Meat is sold starting from near the end of June until December with skin and hide being sold at the same time as the meat. Some male animals are sold in the spring while female animals are retained to care for the calves according to an interview with Professor D. Lkhagvadorj.

This is problematic because debt is a major problem for Mongolians in general and herders in particular. Forty percent of herders had a loan in 2019. Herder Nyamdorj confirmed that a lot of herders carry debt. “Everyone owes money on livestock. Herders have little cash, so they pledge their livestock and take a separate loan as a herder loan. On average, herders have a loan of about five million MNT.”

In general, herders spend a great deal of their income on the education of their children, sending them off to schools in the cities and towns. Those who continue studying through university usually do not return. As a result, the number of herding households is expected to continue declining while the size of the commercial herds will continue to grow.

The author, Dr. Antonio Graceffo PhD China-MBA, worked as an economics researcher and university professor in China, but is now living in Ulaanbaatar, writing about the Mongolian and Chinese economies. He holds a PhD from Shanghai University of Sport Wushu Department where he wrote his dissertation “A Cross Cultural Comparison of Chinese and Western Wrestling” in Chinese. He is the author of 11 books, including A Deeper Look at the Chinese Economy, The Wrestler’s Dissertation, and Warrior Odyssey. He completed post-doctoral studies in economics at Shanghai University, specializing in US-China Trade, China’s Belt and Road Initiative, and Trump-China economics. His China economic reports are featured regularly in The Foreign Policy Journal and published in Chinese at The Shanghai Institute of American Studies, a Chinese government think tank.

CENTRAL ASIA BLOG: Mongolia frets over prospect of default
NEO: Why copper mining must clean up its act
Boris Johnson’s half-brother to sue Mongolia for $50mn in a mining investment dispute

Attacks come as Turkey’s president Erdogan prepares country for another dizzying U-turn when it comes to Syrian counterpart and foe Assad.