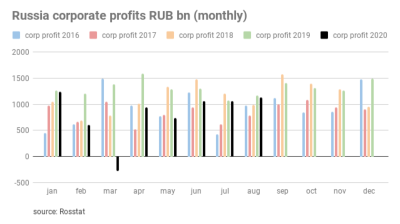 The profitability of Russian companies emerged from the coronacrisis at the end of June, but it has cost them RUB3.8 trillion rubles in lost earnings so far this year
By bne IntelliNews October 29, 2020

The coronacrisis has cost Russian companies RUB3.8 trillion ($47bn) in lost profits this year as of August, according to the latest data available.

Russian companies emerged from the crisis at the end of June, but there is a still big hole of losses in their balance sheet caused by the loss of business in the second quarter of this year.

Corporate profitability in Russia recovered most of the ground lost to the crisis in July and August and the companies were earning the same as they earned in 2019. However, thanks to the money that was lost in the first half of this year the cumulative profits are still on a par with 2016 and 2017.

That result also puts earnings in August well ahead of the RUB993bn they earned in 2018 and RUB793bn in 2017, when Russia was still emerging from the 2014 collapse in oil prices – a much deeper and much more painful crisis than this one, in terms of lost profits.

However, looking at cumulative profits there is a lot more catching up to do. Russian companies have earned a total of RUB6.5 trillion this year, still well behind the RUB10.28 trillion they earned over the first eight months of 2019.

The chances of Russian companies making back some of the ground lost this year in the last months of the year is fading rapidly as the coronavirus (COVID-19) re-emerges and infection rates soar to fresh record highs as the autumn weather arrives and people move indoors. However, the government has made it clear it will avoid another lockdown at all costs as it tries to protect economic activity which might cushion losses to some extent.

With 22 regions from a total of 85 reporting hospitals at 90-95% capacity already it may not be possible to avoid a lockdown to prevent the medical system collapsing. This week has seen several European countries re-impose lockdowns, including Germany, Spain, Slovenia and Czechia, where the infection rates have spiked. Moscow has chosen to go for a lockdown-lite so far that includes enforcing the existing restrictions much more vigorously in the hope of containing the infection rate.

The resurgence of the virus is already visible in the macro statistics, where retail foot traffic is down notably as bne IntelliNews  reported. September’s industrial production numbers also showed an unexpected slowdown.

Romania's industrial production index increased by 13.4% y/y in March but this was largely a reflection of the lockdown enforced in March 2020.

Inflation in Serbia has been speeding up gradually since the beginning of the year.

Growth to be driven by domestic consumption while a negative contribution is expected from net exports.