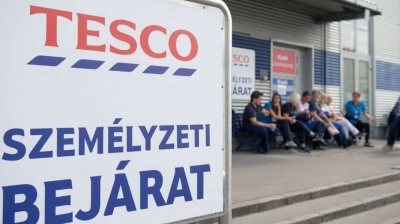 Tesco is the largest private employer in Hungary with 16,000 staff
By bne IntelliNews July 21, 2020

UK-based retail giant Tesco is redeploying some 700 staff in Hungary as part of a reorganisation drive, local media wrote on July 21.

Hungary’s largest retailer says the move is technical as most workers will be offered new positions. Legally the termination of positions constitutes mass layoffs and employees received notifications of the plans with that subject, which fuelled speculation that Tesco is shedding hundreds of jobs.

Tesco retained its leading position in Hungary with HUF740bn (€2.1bn) in gross sales last year, down 2.8% from 2018, according to the annual compilation of the 11 largest FMCG retailers by Trademagazin.

CEO of Tesco Central Europe Matt Simister told local media that the company has undergone the largest transformation on record in its product supply and optimised the space of hypermarkets below 7,500 m2.

"As we have reduced the size of larger stores fewer people are needed to operate them. As Hungary's largest private sector employer, we are now focusing on becoming a quality employer" he said.

In the last five years the company closed 15 unprofitable units, mainly smaller shops, as part of a cost-cutting drive and has outsourced logistics to Waberers.

In 2017 Tesco workers went on a two-day strike. It was the first national walkout at a multinational market chain since 1990.

Over the years the company dispelled speculation about a possible withdrawal from the Hungarian market on numerous occasions. These rumours popped up again as the UK-based grocer announced its exit from the Polish market.