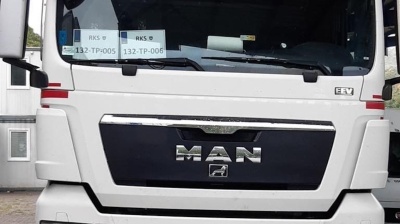 A lorry with temporary licence plates.
By Valentina Dimitrievska in Skopje September 20, 2021

Tensions in Kosovo escalated after the government in Pristina decided on September 20 to re-establish reciprocity with Serbia for vehicle registration plates, which sparked protests by ethnic Serbs in the country.

Under the measure, drivers from Serbia are forced to replace their license plates with temporary ones to enter Kosovo.

“We inform the citizens that for entering Kosovo they must be provided with temporary registration plates of the Republic of Kosovo, in line with today's decision of the Ministry of Internal Affairs,” the ministry said.

The registration plates must be placed in visible places and can be provided for a fee of €5. They are valid for 60 days.

Serb residents in the north of Kosovo launched a protest against the decision, keeping the roads leading to the border crossings with Serbia, in Jarinje and Brnjak, blocked.

The protest forced the Kosovo special police to send armoured vehicles to the border to control the situation.

Serbs near the border have set up tents to spend the night, and near them they have unfurled a large banner saying "Welcome to the Community of Serbian Municipalities", RTK reported.

The Community of Serb Municipalities, stipulated by the Brussels Agreement in 2012, has not been yet established, as the Constitutional Court has found that many of its points are in conflict with the Kosovan constitution.

In the vicinity of the border crossing Jarinje, cars are not able to move because the road has been blocked by trucks and cars, which have created a queue of several kilometres, according to Gazeta Express.

Kosovo Prime Minister Albin Kurti said that Serbia was the first to impose temporary licence plates, adding that the move is not directed against Serbs.

Kosovo unilaterally declared independence from Serbia in 2008, but it is still not recognised by Belgrade as a separate state.

Prior to the tensions, Serbian President Aleksandar Vucic announced that he held a conversation with the EU special envoy for the dialogue between Belgrade and Pristina, Miroslav Lajcak, about the new situation with Kosovo.

Serbian agency Tanjug quoted Vucic as saying that Serbia “does not see any meaning” in the normalisation dialogue at this moment.

However, he stated that Serbia must always be ready to talk and opt for dialogue even under the most difficult conditions.

Kosovan broadcaster RKT cited security expert Nuredin Ibishi as saying that the imposition of reciprocity measures with Serbia in terms of car plates is not expected to destabilise the situation in northern Kosovo, populated mainly with ethnic Serbs.

The reciprocity measure in trade with Serbia was imposed by Kurti’s previous government, which abolished the 100% tax on all products from Serbia in March 2020, but replaced it with reciprocity measures on May 30 in an effort to pressure Belgrade to recognise Kosovo as a state.

The reciprocity measure was scrapped by Kurti's successor Avdullah Hoti in June 2020 because it was seen as an obstacle to the EU-facilitated dialogue with Belgrade.

Trade Minister Rozeta Hajdari said in July this year that Kosovo’s government, led by Kurti, is preparing to re-impose reciprocity measures against Serbia to fulfil its February election campaign promise.