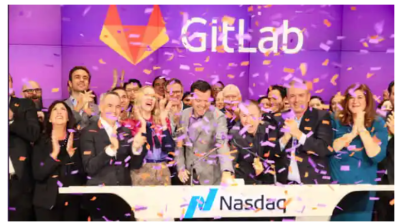 Set up as an open source project in Ukraine in 2011, GitLab platform is designed to “maximize the overall return on software development” and listed on Nasdaq with a valuation of $11bn on October 14. / wiki
By East West Digital News in Moscow October 15, 2021

GitLab (‘GTLB’), a San Francisco-based open-source software startup founded by Ukrainian entrepreneur Dmitry Zaporozhets and Dutch-born Sid Sijbrandij, made its debut on the Nasdaq at a valuation of $11bn on October 14, reports East-West Digital News (EWDN).

Priced at $77 late the day before, the stock started trading on the 14 at $94.25, pushing GitLab’s market cap to $13.5bn, reports CNBC. This is about 58 times annualized revenue, which would put the company at the fifth place among 58 companies in the Bessemer Cloud Index.

GitLab raised some $650mn in the offering. Over $150mn of additional stock were purchased from an entity affiliated with Sijbrandij.

“With GitLab, every team in your organization can collaboratively plan, build, secure, and deploy software to drive business outcomes faster with complete transparency, consistency and traceability,” the company claims.

GitLab’s revenue in the second quarter of 2021 jumped to $58mn, up 69% from a year earlier. A net loss of $40.2mn was recorded in the latest quarter, as the company spends around 75% of its revenue on sales and marketing, according to CNBC.

In November 2020 GitLab saw its valuation jump to $6bn as it organized a $195mn secondary sale.

John Malkovich to turn Skopje into Hollywood of the Balkans
Business Insider: Western tech majors have tested or used controversial Russian face recognition technology
From 4G to 6G: How Russia seeks to develop mobile networks amid shortages of domestic frequency and foreign equipment

Business Insider: Western tech majors have tested or used controversial Russian face recognition technology
4 days ago
From 4G to 6G: How Russia seeks to develop mobile networks amid shortages of domestic frequency and foreign equipment
4 days ago
Should I stay or go for founder of Russian internet major Yandex
9 days ago
EVs in Uzbekistan bring problems and prospects
12 days ago
Poland-based Deepflare bags €1.5mn to fast-track mRNA vaccine development with AI
14 days ago