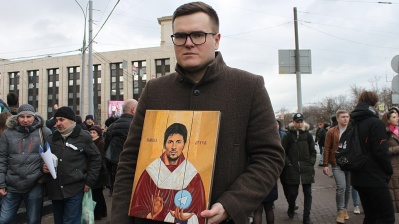 Durov as an icon. A protester holding a painting of the Telegram co-founder during a demonstration last year against Russia's "sovereign internet" law.
By bne IntelIiNews June 22, 2020

Co-founder of the encrypted Telegram instant messaging service, Pavel Durov, said on his channel on June 22 that the company plans to create proxy servers to work in Iran where it is hindered by official efforts to block it.

The mysterious Durov has previously said discussions took place with the Iranian government to get the app unblocked, but that the conversations ended when he refused to share user data with the Iranian Intelligence Service.

Despite the current filtering of the app in Iran, it remains the most popular such application after WhatsApp, which is accessible but open to so-called man-in-the-middle snooping, according to Durov’s statements made on previous occasions.

Durov called on Telegram company employees to pay attention to "those countries where Telegram is still blocked at the state level, such as Iran and China."

"We ask the admins of the former proxy servers for Russian users to focus their efforts on these countries. They should also stand ready for new challenges," the billionaire added.

Russia’s Roskomnadzor watchdog said on June 19 it would lift its ban on using Telegram in the country following a decision cleared with the general prosecutor.

Telegram has been blocked in Russia since 2018 after a stand-off with the security services and legislators who demanded compliance with anti-terrorism laws and a commitment to sharing encryption keys.

Telegram’s claimed ‘uncrackability’ is one of the main appeals of the service. It is widely used by Russian State Duma deputies precisely because the FSB cannot listen in on their conversations.

Durov, who has his offices in Dubai and lives in self-imposed exile, is a leader in the Eurasian tech sector. Two years ago, he raised $1.7bn in the largest ICO (initial coin offering) ever to fund the development of TON blockchain.

However, Durov has also fallen foul of US authorities. They classed the blockchain’s Gram coin as an unregulated security and banned it. Durov cancelled the project and may now have to return the money he raised to investors.