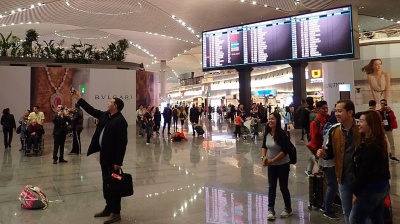 The mega airport is grandiose, but its practical performance as a flight hub so far leaves plenty to be desired.
By bne IntelliNews June 18, 2019

Istanbul’s new airport appears to have proven a drag on the stock of Turkey’s flag carrier Turkish Airlines, but its launch three months ago at the same time seems to have boosted the shares of its budget rival Pegasus, Bloomberg wrote on June 18.

The stock of Pegasus Hava Tasimaciligi has outperformed that of Turk Hava Yollari AO, or Turkish Airlines as the company is known, by more than 95 percentage points this year. The divergence has been amplified by bets that it stands to gain amid setbacks that have plagued its rival—Turkish Airlines is now flying primarily from the new mega airport opened 20 miles outside Istanbul city centre.

The $12bn Istanbul Airport is located on the foggy Black Sea coast and local reports show it struggling against far too many diverted flights, delays and long runway taxi times, all of which threatens to erode Turkish Airlines’ earnings.

Meanwhile, Pegasus is the choice for many passengers determined to steer clear of any inconvenience. By choosing Sabiha Gokcen International Airport—Istanbul’s second airport on the Asian side of the city following the closure of Ataturk Airport to commercial flights to facilitate the opening of Istanbul Airport—they can easily opt for Pegasus as that is where the bulk of its flights operate from.

While the travails for Turkish Airlines are likely temporary, “Sabiha Gokcen’s strategic importance has increased,” Behlul Katas, an analyst at Yatirim Finansman, an Istanbul-based broker, reportedly said, citing the distance that passengers have to travel to reach Istanbul Airport and concerns over the costs the flag carrier needs to assume at its new hub. He has an outperform rating on both Turkish Airlines and Pegasus stocks.

In the first five months through May, passenger traffic at Sabiha Gokcen rose 2% compared to the same period a year earlier while international passengers surged 19%, according to data from the Turkish airport authority cited by Bloomberg. Traffic at Istanbul Airport and the retired Ataturk Airport combined fell 4% over the period, with international passengers rising a mere 0.3%.

Turkish Airlines is guiding for $14.1bn in sales and 80mn passengers in 2019, according to a public filing made in January. It posted a Turkish lira (TRY) 1.25bn ($210mn) loss in the first quarter, almost double the median estimate in a Bloomberg survey.

In May, offshore investors sold more Turkish Airlines shares than any other security on the benchmark Borsa Istanbul 100 Index, according to the latest data from the exchange. Meanwhile, inflows into Pegasus over the same period increased by $14mn, figures from the news agency show.

Turkish Airlines stock has dropped 18% this year. It was trading at TRY13.15 per share on June 18, after suffering a more than one-year low in May. Pegasus has rallied 79% over the period, to a five-year high of TRY40.98 per share.

Turkish Airlines has discounted the potential risks “perhaps more than any other in the market,” Julian Rimmer, a trader at Investec Bank in London, was reported as saying. He said the stock’s stellar performance last year aggravated its drop.

But for Ozgur Yasar Guyuldar, the head of global emerging markets sales at Raiffeisen Centrobank, the worst may be yet to come. Turkish Airlines “had to reduce volume during relocation which may negatively affect second quarter financials,” he was quoted as saying.

The German government from June plans to lift a tourist travel warning applied to 31 European countries, but Turkey is not among them, according to German media. In addition to Germany's 26 ... more

Turkey does not risk a second wave of coronavirus (COVID-19) infections as things stand, according to its health minister Fahrettin Koca. “If we continue to abide by the rules of social ... more