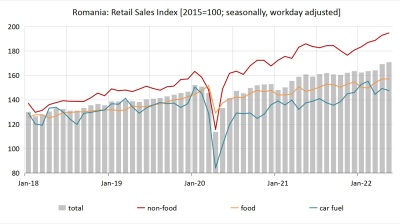 The retail sales volume rose in Romania by 8.1% y/y in May, marking the highest annual growth rate in eight months despite the consumer prices having reached 14.5% y/y in the month and putting pressure on households’ real incomes.

Additional consumption generated by the refugees from Ukraine, as well as households front-loading planned expenditures before the price rises, resulted in robust sales that are not helping price stability.

One of the factors driving the non-food sales may be the households opting to “invest” their money in goods expected to cost more in the coming months (front-loading planned expenditures). This is only relevant for non-food sales, though.

Another driver for the robust retail sales is the supplementary consumption generated by the refugees from Ukraine: around 100,000 have remained in the country out of the 1.3mn that entered Romania since the beginning of the war.

Separately, sales of car fuels and food are not that high in absolute terms historically: they still remain close to the pre-crisis levels, while real incomes, despite the record inflation recently, have advanced.

As of March this year, the average net wage was 9.4% higher compared to March 2019 in real terms (meaning despite the 17% rise in consumer prices over the past three years).