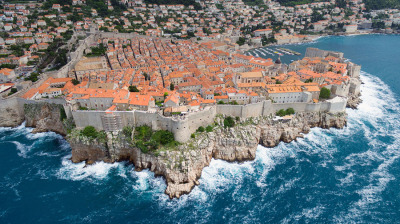 EU corona-support spending by the EU will be as much as a third of GDP and give their economies a significant boost
By bne IntelliNews December 2, 2020

Member states from Southeast Europe are set to be the greatest beneficiaries from the substantial EU funding planned through the next seven-year budget and the NextGenerationEU initiative, supporting their recovery from the coronacrisis and enabling investments into areas such as physical and digital infrastructure that are crucial for attracting further investment.

Due to the veto currently being exercised by two EU members, Hungary and Poland, the package has not yet been passed. It is planned to comprise the EU long-term budget for 2021-27 amounting to €1.1 trillion together with the €750bn NextGenerationEU initiative; the two combined will make up the largest stimulus package ever financed through the EU budget, totalling €1.85 trillion. According to EU officials, the package is aimed at helping to rebuild the bloc post-COVID-19 as a “greener, more digital and more resilient Europe”.

As the poorer EU members (with some exceptions), the newer members from Central and especially Southeast Europe are expected to benefit the most compared to the size of their economies.

Over the next two years alone, countries EU support is forecast to reach 11% of GDP in Croatia – one of the worst hit countries in the bloc by the coronacrisis thanks to its large tourism sector – and 10% in Bulgaria. Greece and Portugal, both tourism-dependent “old EU” countries, plus Latvia, Romania and Slovakia will also be among the top beneficiaries in 2021-22, according to analysis by the Vienna Institute for International Economic Studies (wiiw). This will help them through the remaining months of the pandemic – likely to be under heavy restrictions and partial lockdowns for much of the time – and into recovery once large-scale vaccination is underway.

“We think that for the EU member states [of emerging Europe], availably of fiscal space will not be an issue, as they have few problems borrowing money in the markets due to their good credit ratings,” said wiiw economist Valery Astrov in a webinar on November 12.

“The EU member states will also receive strong support under the NextGenerationEU programme. A key ingredient is the EU Recovery and Resilience Facility. According to the already planned allocations to individual countries, the funds most of the East European countries are expected to receive from the EU are rather high in relation to their GDP.”

On the other hand, adds Astrov, for their neighbours outside the EU, in some of the Western Balkan countries as well as Ukraine and Moldova, “fiscal policy space may be a problem, [as] some of these countries already have high public debt to GDP ratios.”

In the longer term, Bulgaria and Croatia are also set to be the top beneficiaries of EU funding over the seven-year budget period.

Tim Umberger, deputy head of Eastern Europe investments at East Capital, notes that Southeast Europe will be the key beneficiary of the EU Recovery Fund and the EU 2021-2027 budget thanks to the size of the funds, the timing and the strong multiplier effects. “In terms of size … the combined EU Recovery Fund and previously communicated EU Cohesion Funds for 2021-2027 are massive,” wrote Umberger in a comment for bne IntelliNews.

"Bulgaria and Croatia will receive funding equivalent to 35% of their 2019 GDP, while Greece, Romania and Slovenia will get support amounting to 27%, 26% and 17% of their 2019 GDP respectively. This means an additional 2.5% to 5% of GDP annually, a number that will be extremely supportive for the mid-term economic outlook.”

He also noted that governments are eager to put the funds to work: “Our conversations with policymakers in Slovenia and Greece suggest governments will not waste any time in preparing the projects to be able to draw the majority of funding available.”

“As the funding will be targeting multiple broad infrastructure projects and will be focusing on green transformation and improvements in structural efficiency, we expect sizeable multiplier effects in economic growth for Southeastern Europe,” Umberger added.

Croatia is also set to receive a substantial chunk of EU funds – €683.7mn – to support the rebuild and recovery of the capital Zagreb after the earthquake that struck in March, damaging homes and other buildings and causing an estimated HRK86bn (€11.2bn) worth of damage.

This will be a boon for the country, whose economy is forecast by most international financial institutions to shrink by 9% or more this year, the deepest contraction among the new EU members of Central and Southeast Europe, and one of the worst across the 27-member bloc as well as in the broader emerging Europe region.

The contraction is in large part due to the slump in tourist numbers visiting during the pandemic, and looking forward, “uncertainty and lingering travel restrictions weigh on exports, including tourism,” stated the European Commission’s Autumn Forecast. Domestic demand is expected to be the main engine of the recovery, while exports will be slower to recover. “While goods exports should rise in line with the recovery in Croatia’s main trading partners, service sector exports, dominated by tourism, are expected to remain under the pressure of travel restrictions, disruptions in air travel, and changes in consumer preferences in favour of domestic travel,” the European Commission report says.

Croatia’s Prime Minister Andrej Plenkovic commented back in May, when the details of the EU support were thrashed out, that they showed the benefits of EU membership. "I want to send a message to the Croatian public that in a time of crisis we see the significance of membership [of] the EU and the significance of how much European funds help us to return to the path of economic recovery as soon as possible," Plenkovic said, according to a government statement.

Bulgaria, the EU’s poorest country and the biggest recipient of EU funds during the next seven years as a share of GDP along with Croatia, hasn’t been as badly hit by the coronacrisis as Croatia and is expected to see a more modest contraction this year.

The country is currently in the throes of the second wave of infections, with a second lockdown anticipated to be imposed imminently. It is ranked first in terms of the share of people who have died from coronavirus in Europe in per capita terms. This is set to lead to a new fall in consumer confidence, further limiting private consumption. Bulgaria has also been shaken by a series of high-level corruption scandals that eventually sparked several months of daily mass protests this summer, dampening investor interest in the country.

While these and other states from the eastern part of the union are set to benefit disproportionately from the package currently being discussed by EU leaders, its future is still in question, as Poland and Hungary united to block the adoption of the budget and the recovery fund on November 16 over a provision linking the disbursement of the funds to respecting the rule of law. They must be adopted unanimously by all member states before being ratified by each parliament. While talks are underway in an attempt to find a solution to the deadlock, there is a chance the EU could enter 2021 with a bare bones provisional budget.

The risk of losing billions of euros in much-needed funding has united many of their neighbours against the two illiberal democracies. The Czech and Slovak foreign ministers called at a joint press conference on November 18 for action to ensure the release of the funds.

Several days later, Romanian Prime Minister Ludovic Orban spoke out on the issue to Politico, calling on the two governments to reconsider. “The governments of the countries that oppose this conditionality must understand that it is necessary to build public trust around this programme, which is extremely important for relaunching the economy of the whole of Europe, for the benefit of citizens in Poland and Hungary,” said Orban.

The new member states that joined the EU from 2004 onwards have already received substantial amounts of funding from previous budgets, that have supported investments into infrastructure and other areas, helping their – as yet not completed – convergence with the older, Western members. The next budget and recovery funding is a chance to accelerate the catch-up process.

Spring lockdown caused spike in online transactions in Croatia
ING: Growth in the Balkans: from zero to hero again?
Labour demand down 28% y/y in Croatia in 2020