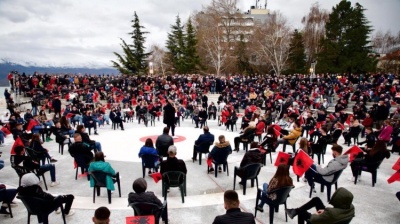 One person was killed and four others injured in a shooting in the Albanian city of Elbasan on April 21, four days before Albanians vote in the April 25 general election.

According to local media reports, an activist with the ruling Socialist Party was shot dead, and another Socialist Party worker was among those injured. Media reports claim the assailant was a bodyguard for an opposition Democratic Party politician. Also injured were two other bodyguards working for the same politician and a police officer who tried to intervene.

Taulant Balla, the head of the Socialist group in the Albanian parliament, wrote on Facebook that "paramilitary groups, armed people from other cities” arrived in Elbasan to “terrorise” local citizens. He also called on the Democratic Party to “give up this escalation of violence”.

Meanwhile, Gazment Bardhi, the opposition politician whose bodyguard is believed to have committed the shooting, claimed money was being distributed to voters from a car he claimed was owned by a Socialist supporter, AP reported.

Prime Minister Edi Rama, who is hoping to win a third term at the helm of the Socialist Party, said the shooting shows “despair” within the Democratic Party, which is beginning to “feel itself defeated”.

Two days earlier, a 27-year-old Democratic Party worker was shot at the party’s offices in the town of Kavaja on April 19. Bledar Okshtuni was shot in the leg with a pistol.

“We have seen the reports of violence in Elbasan today resulting in the death of one individual and injury to others.  We call on law enforcement officials to investigate this incident quickly and thoroughly, identify perpetrators, and prosecute them to the full extent of the law. Those who engage in such violence must be punished,” said a statement issued by the US embassy in Tirana.

“Ambassador Kim has asked President [Ilir] Meta, Prime Minister Rama and Democratic Party chairman [Lulzim] Basha to exercise restraint – and to lead accordingly – pending investigation of this case. Our actions must be based on facts, not fear or rumour. With just a few days remaining before elections on April 25, we reiterate our statement of March 26 calling for leaders – those in office and those seeking office – to clearly reject violence. The US Embassy will continue to monitor the situation closely.”