Slowdown on the cards for Central Europe as economic sentiment plunges 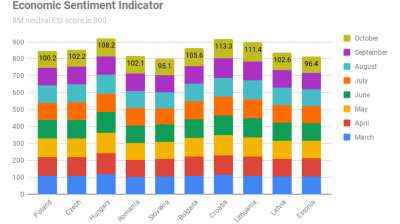 The European Commission’s Economic Sentiment Indicators (ESIs) turned south across Central Europe in October, suggesting the economies of the region will slow down from here as a miasma descends.

ESIs rose in only two of the ten Central European economies and fell in the remaining eight.

Capital Economics predicts that based on the rate of the fall in sentiment the surveys suggest that GDP growth in the region slowed from about 4% y/y in Q3 to 3.7% y/y at the start of Q4.

“Our CEE GDP-weighted ESI dropped to its lowest level since August 2016. It is now consistent with regional GDP growth of about 3.7% y/y (compared with around 4% y/y over the third quarter as a whole),” Jackson said.

The falling ESI scores are consistent with the falling IHS Markit Russia Manufacturing Purchasing Index (PMI) scores that most of these countries have been putting in for the last two months, as bne IntelliNews has been reporting.

Hungary's seasonally-adjusted Purchasing Managers' Index (PMI) fell to 51.8 in September from 52.6 in August, but still above the 50 no-change mark. Poland’s PMI fell 1 point to 47.8 in September, remaining below the 50-point line separating contraction from growth for the eleventh month in succession and is stuck at a six-year low.  Czechia’s PMI is even worse and currently at its lowest level in a decade at a mere 44.9 points.

“Weakness was particularly stark in the Czech Republic, Slovakia and Estonia, whose industrial confidence survey dropped to its lowest level since the aftermath of the global financial crisis,” Jackson added.

“However, there is also now growing evidence that weakness in industry is starting to affect domestic-focused sectors. We noted previously that the surveys for the services sector fell in September – and this continued in October. And the retail trade confidence surveys dropped to multi-year lows in the Czech Republic and Poland this month. Finally, Hungary’s construction confidence survey dropped to a two-year low, suggesting that this sector’s recent boom may have started to fade.”

Czech industrial production down by 25% y/y in May, up 13.8% m/m
3 days ago
Foreigners’ share at Borsa Istanbul falls below 50%
4 days ago
Albania’s annual CPI inflation slows to 1.8% in June
4 days ago
COVID-19 lockdown sends Hungary's industrial output back to 2013 levels
4 days ago
Russia’s Watcom Shopping Index regains three quarters of ground lost to coronacrisis
5 days ago