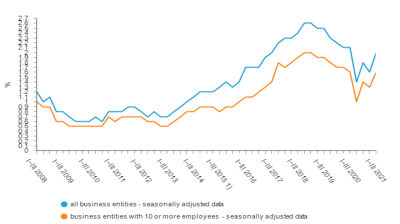 Almost 16,100 job vacancies were recorded in Slovenia in the first quarter of 2021, which is almost 3,500 more than in the previous three months, while the number of occupied posts remained the same, the statistics office said on May 13.

Employers were looking for new workers in 13 out of a total of 18 sectors, but the strongest demand was in manufacturing and retail, the statistics office said.

In the manufacturing sector around 1,200 more vacancies were advertised, and 1,100 more in the wholesale and retail sector.

The demand for new labour force fell the most in for health and social work activities, where almost 180 fewer job vacancies were advertised than in the fourth quarter of 2020, followed by the water supply sector, where the number decreased by almost 100.

Accommodation and food service activities recorded the greatest drop in job vacancies, by 41%.

In the first quarter of 2021 seasonally adjusted data showed that in Slovenia almost 771,000 posts were occupied, which is the same as in the previous quarter.

The job vacancy rate was 2% in the period under review, which is four tenths of a percentage point higher than in the previous quarter.